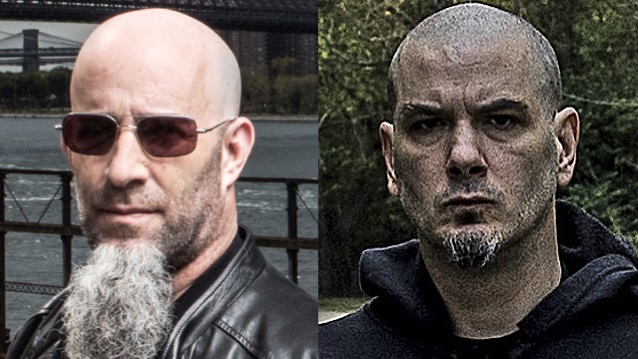 Scott Ian has defended his decision to publicly criticize Philip Anselmo in the wake of last year's "Dimebash" incident, saying that friends "have the responsibility to call somebody out" when they "think they're doing something wrong."

At a January 2016 event at the Lucky Strike Live in Hollywood in honor of late PANTERA guitarist "Dimebag" Darrell Abbott, Anselmo performed the PANTERA classic "Walk". As he left the stage, he was caught on video making a Nazi-style salute and appearing to say "white power."

Although the former PANTERA frontman initially commented on the video to claim that he was "joking," he later apologized for what he did, saying that "it was uncalled for" and asking fans to give him "another chance."

In the days following the incident, Ian, who is Jewish, released a statement on his official web site saying, "Philip's actions were vile" and invited Anselmo to make a donation to the Simon Wiesenthal Center, a human-rights organization that confronts anti-Semitism and hate speech.

During a brand new interview with Pierre Gutiérrez of Peru's Hablas ROCKas, the ANTHRAX guitarist was asked if he thinks it was "fair" of him to have publicly taken Anselmo to task for his behavior at "Dimebash". Scott responded (hear audio below): "I think friends and family have the responsibility to call somebody out when they think… Look, I consider myself somebody's friend if I can call them out when I think they're doing something wrong. And that's really all I have to say about it. I think if you keep your mouth shut, then you really don't care about the person."

Scott was then asked if he was aware of Anselmo's claim that he yelled "white power" and threw the Nazi salute because he was reacting to the audience members up front who he says were taunting him.

"Honestly, it's something I haven't given much thought to since it all happened," Ian said. "I said what I had to say, and whoever said whatever they had to say, and as far as I'm concerned, it's water under the bridge at this point."

Ian also talked about the criticism that has been leveled at him for calling out Anselmo for his allegedly racist actions when Scott himself was involved in STORMTROOPERS OF DEATH, the mid-'80s politically incorrect side project whose debut album, "Speak English Or Die", would likely cause an uproar if it was released today.

"There's no way to answer that question because the record came out in 1985," Ian said about the S.O.D. release. "So if you wanna speculate about a fantasy, then you may have time to do that in your day, but I don't. As far as I'm concerned, when that [record came out in] 1985, either people understood that we were making fun of assholes and racists and people that would say 'Speak English or die'… So either people understood where it was coming from or they didn't, and if they didn't understand, it wasn't our responsibility to educate them. We were just having fun."

In February 2016, Ian told Sticks For Stones that Anselmo should be forgiven for his actions "if he proves that he deserves to be. Just asking to be forgiven doesn't mean you should be forgiven. And I've had a running dialog with Phil since this happened. It's not like I just posted something online without actually speaking to my friend. I've been having a dialog back and forth with him. 'Cause if I didn't care, I wouldn't have contacted him at all. But I cared. Phil, I've known the dude almost thirty years. He's like a brother; he's family. And when someone in your family has a problem, you discuss it and you try and find a solution."

Ian reiterated that he wanted to see Anselmo learn from the incident and realize the error of his ways.

A few months later, Philip revealed to Rolling Stone that "made a donation" to the Simon Wiesenthal Center in January 2016, shortly after video footage of his "Dimebash" antics went viral. "But guess who didn't have the guts to fucking come out and tell the press that? [Scott Ian], who wrote 'Speak English Or Die'. The dude who wrote 'Aren't You Hungry?' [goading people who suffer from world starvation]. If that record came out today, we'd never fucking hear the fucking goddamn end of it. So pardon me. Maybe Scott did at one point or another come out and say that, 'Yeah, Phil did donate, so that's good.' But you hadn't heard of it.

"I donated the next fucking day, or maybe the next hour after we spoke on the phone," Anselmo added. "And then I heard nothing about it in the press. Have I grown a little sour of it? Damn right I have. It's clickbait. No one wants to hear the good side of anything."