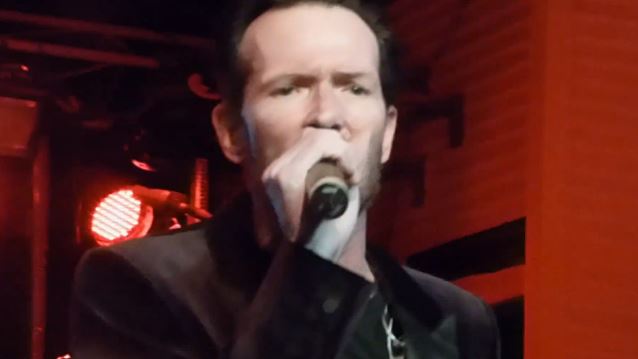 SCOTT WEILAND 'Appears To Have Crashed And Burned'

**Update**: A representative for Weiland tells TMZ that "perfect storm" of Scott being tired and having a couple of drinks before the show is to blame for the singer's lackluster performance in Corpus Christi. The representative adds that Scott's earpiece went out during the show, making it hard for him to stay on point. He says, "Good news we've overnighted him a brand new pair of earbuds and they will be there for his show in Baton Rouge tonight."

Former STONE TEMPLE PILOTS and VELVET REVOLVER frontman Scott Weiland is being slammed for his "sluggish" performances with his band THE WILDABOUTS, with one reviewer stating flatly that the singer "appears to have crashed and burned. Badly."

Prior to launching into the STP classic "Vasoline" at THE WILDABOUTS' April 28 concert in Corpus Christi, Texas, Weiland told the fans in the audience (see video below): "All right, this is a new song. We just worked it out today." The band's energetic instrumental performance was accompanied by Scott mumbling the lyrics into the mic tiredly, with the vocalist seemingly making no effort to interact with the crowd.

As expected, a number of fans have responded negatively to the video on YouTube, ranging from "This is unacceptable" to "I don't think even the most advanced Auto-Tune program could save this train wreck." Another YouTube user called the performance "heartbreaking," adding: "Enough is enough! SCOTT, PLEASE GET HELP!!! And how can the band play like nothing's wrong?"

In her review of THE WILDABOUTS' April 29 concert in Houston, Angelica Leicht of the Houston Press wrote: "At the height of his career, catching Weiland onstage was a sight to behold. He would claw his way into the music, slinking and scratching like a feral, talented cat as he pumped out the lyrics. The show behind Weiland's brilliant vocals — showmanship, for lack of a better term — worked to amplify his deep connection to his music. But as of last night, trouble has definitely become a vortex for Weiland, and he appears to have crashed and burned. Badly." She added: "To be fair, as sluggish as Weiland appears now onstage, he does appear to be trying, at least in part. This new, on-time version is a vast improvement from years of late and canceled shows, and his once very-public antics have been kept to a minimum recently."

Asked by Yahoo! Music to compare current STONE TEMPE PILOTS vocalist Chester Bennington with Weiland, STP guitarist Dean DeLeo replied, "There's no comparison. It's like talking about the strength of a two-year-old baby compared to a professional body builder. I'll tell you this man, Robert [DeLeo, bass], Eric [Kretz, drums] and I are really fortunate. We're having the time of our lives right now. We really feel like this has been a rebirth."

"[Robert, Eric and I] never had trouble," DeLeo said. "Our trouble was Scott. Scott's troubles were our troubles."

Dean DeLeo told the Orange County Register about the band's decision to fire Weiland in 2013 and replace him with Bennington: "Robert, Eric, Scott and I had put 25 years of our lives into it. Just because I had one guy that didn't really give a shit anymore, I'm not going to let one guy ruin my dream, my band and my legacy. I worked hard for STONE TEMPLE PILOTS and I love it with a passion. Robert, Eric and I don't take for granted what the music has meant to people."

STP dismissed Weiland in February 2013, claiming that his erratic behavior held back the band's career. The two parties exchanged lawsuits which have since been settled.

STP recruited Bennington that spring and have so far cut one EP, "High Rise", with the LINKIN PARK singer. A new album is due out later this year.

Weiland and THE WILDABOUTS are on the road promoting his new album, "Blaster", which came out on March 31.