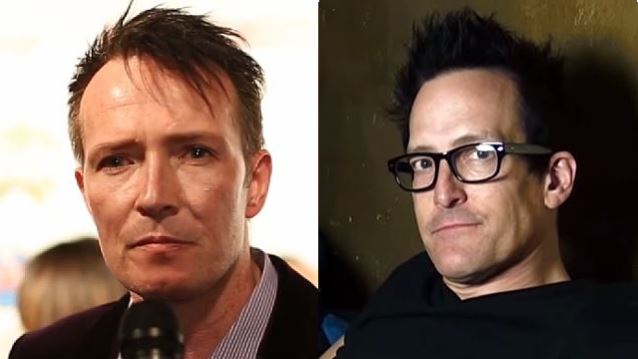 SCOTT WEILAND To RICHARD PATRICK: 'I Haven't Had A Needle In My Arm In Thirteen Years'

Speaking with MusicFrenzy.net, Patrick defended STP's decision to fire Weiland in 2013 and replace him with LINKIN PARK's Chester Bennington.

Patrick, who once played in the short-lived act ARMY OF ANYONE with STP's Dean and Robert DeLeo, explained, "The amount of shit that [the fans] give the band for trying to have a normal life… [The fans are] just sticking up for Scott, and they have no idea of [what is going on] behind the scenes." He added, "They're pushing him into his death, because they're making him believe that, 'Whatever I did is acceptable. And I can be as high as I want. And I can do as much drugs as I want.'"

Patrick continued: "[Some STP fans say], 'He's a badass rock and roll star. You can't have STP without Scott Weiland.' Okay, well, you're gonna get what you want — he'll be a rock-star legend that died in a hotel room with a needle sticking out of his arm, and it will not be a cool thing, and it will be sad, and his kids will be traumatized."

Patrick also said, "It's sad that three guys have to sit around and wait for someone to show up to a rehearsal. And they've been there for two weeks working, and the singer hasn't even shown up. And you get onstage and the guy doesn't even know how to sing his own songs. And it's pathetic. And it's sad for everybody."

In response to Patrick's comments, Weiland has released the following statement to BLABBERMOUTH.NET:

"Hey, Richard — thanks for your thoughts and opinions on my life. Just so you know, and others do as well, I haven't had a needle in my arm in thirteen years.

"Overcoming my addiction to heroin was the hardest thing I've ever done, and I'm damn proud of the fact that the time in my life when drugs were stronger than my commitment to my health is so far behind me, and always will be.

"By the way, man, I recall when I DID do drugs, and you were one of the guys getting high with me. It's behind you, please note and respect that it's behind me too.

"As for my issues with my former band — just remember the old adage that there are two sides to every story.

"I haven't been late for a show in a very long time. I have worked hard to be present and on time for my fans.

"I'm not perfect — no one is — but I have worked my ass off to repair the reputation I created by being thoughtless years ago.

"Why you felt the need to attack me is unclear but I am happy to set the record straight.

"Best regards to you."

Patrick has reportedly been sober since September 2002.

Dean DeLeo told The Pulse Of Radio that the rest of STP did not take firing Weiland lightly. "This definitely wasn't a decision that was made over six months or even a year or six or 10 years," he said. "It's been something that's been going on for a long, long, long time and, you know, it wasn't really so much about the band, it was more of a quality of life I think we just needed for ourselves, you know. I couldn't do it any more. Look, if I'm gonna carry on inappropriately, there's gonna be a thousand guys in line for my job."

STP began working with Bennington in May 2013 after firing Weiland three months earlier, saying that his erratic behavior and pursuit of a solo career had been detrimental to the band.

Weiland recently released an album called "Blaster" with his touring band THE WILDABOUTS.