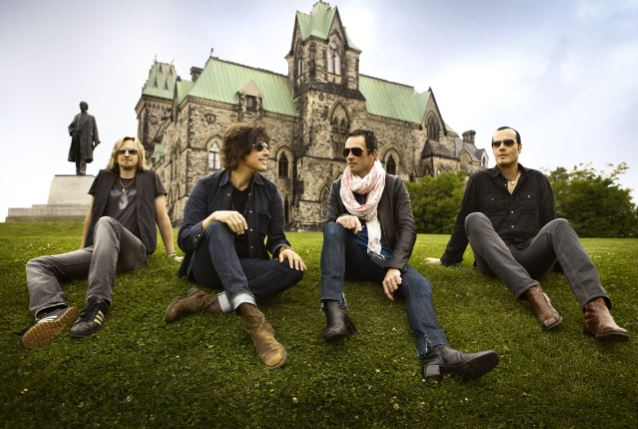 "Let us start by saying thank you for sharing your life with us.

"Together we crafted a legacy of music that has given so many people happiness and great memories.

"The memories are many, and they run deep for us.

"We know amidst the good and the bad you struggled, time and time again. It's what made you who you were.

"You were gifted beyond words, Scott.

"Part of that gift was part of your curse.

"With deep sorrow for you and your family, we are saddened to see you go.

"All of our love and respect.

"We will miss you, brother."

By the time STONE TEMPLE PILOTS' 1996 third album, "Tiny Music… Songs From The Vatican Gift Shop", was released, Weiland was locked in what would be a long struggle with drugs that forced the cancelation of much of the group's 1996/1997 tour schedule.

He was convicted of buying crack cocaine in 1995 and sentenced to one year's probation. He was arrested several more times over the years, for DUI and once for domestic violence, did a five-month jail stint in 1999 and went into rehab in early 2008. He claimed in recent years to have kicked heroin for good in 2002.

During this period, STP released two more albums, 1999's "No. 4" and 2002's "Shangri-La-Dee-Da" before going on hiatus after Weiland and the DeLeo brothers reportedly came to blows backstage during the "Family Values" tour.

Shortly thereafter, STP regrouped and announced a 73-date U.S. tour that was a large success and continued into 2009. The band recorded and released its self-titled sixth album in 2010.

But STP began to have problems with Weiland once again in 2012, stemming from erratic behavior and late or missed performances, and fired him in early 2013, replacing him until this fall with LINKIN PARK vocalist Chester Bennington. Weiland and the band sued each other, eventually reaching a settlement.