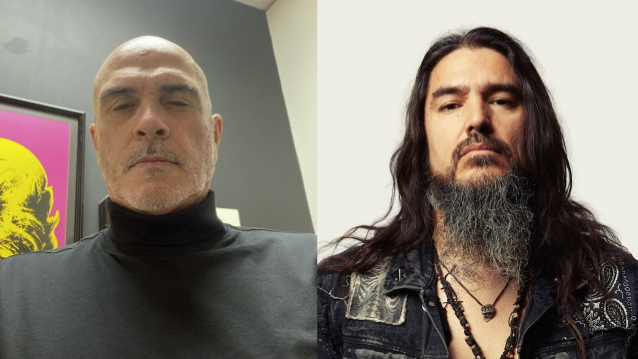 Sean Killian says that he believes Robb Flynn would play with VIO-LENCE again "if the moment was right."

Although Flynn was part of VIO-LENCE's classic incarnation and played on the band's debut album, "Eternal Nightmare", the longtime MACHINE HEAD frontman wasn't approached about taking part in VIO-LENCE's 2018 reunion.

Killian, who initiated VIO-LENCE's reunion several months after undergoing a successful liver transplant surgery, discussed the possibility of Flynn playing with VIO-LENCE again in a new interview with El Cuartel Del Metal. He said (as transcribed by BLABBERMOUTH.NET): "Well, at the time we got back together, that wasn't gonna happen. Robb's got a thing — MACHINE HEAD's a big band; it's a business; they're out touring; people love 'em; they do great. He and Phil, they got personality conflicts over the years. That happens when you're in such tight-knit quarters with people. I can't speak for Robb or Phil but I know that I like 'em both. I was texting Robb the other day.

"For me, I haven't experienced any of what those guys experienced together, so I can't comment on it [except to say] I like 'em both and they're both my friends," the singer continued. "I consider both of 'em my good friends.

"Would Robb play with VIO-LENCE? If it was convenient and it worked out… Obviously, he wouldn't play if Phil was playing, but if Phil was doing something else and we needed a guitar player, I don't know that Robb would say he wouldn't do it. Because we all just have a good time. And he recognizes that VIO-LENCE is a band that just goes out 'cause we love it — we like to write; we like to play live shows; we love the energy from the crowd that the music gets out of 'em.

"Would Robb play with us? I can't speak for him, but if the moment was right, I think he would wanna taste that again," Killian added.

A year ago, Demmel told Dean Delray's "Let There Be Talk" podcast that he hadn't spoken to Flynn since he left MACHINE HEAD and added that he had no "desire or need to talk to him ever again."

In 2019, Demmel told the "In The Pitts Of Metal And Motor Chaos" podcast that MACHINE HEAD ended up becoming a Robb Flynn solo project toward the end of his time with the group. "We weren't a band," he said. "That was Robb's trip, and we were basically just being told what was gonna happen… Everything had changed over time. Shit, we were together for 16 years and stuff changes after that. It's been the band that he started. So things shift, and as they weren't what we agreed to or what we wanted to be a part of, [drummer Dave McClain and I] just left."

VIO-LENCE will release a new EP, "Let The World Burn", on March 4 via Metal Blade Records. A music video for the title track was made available earlier this week.