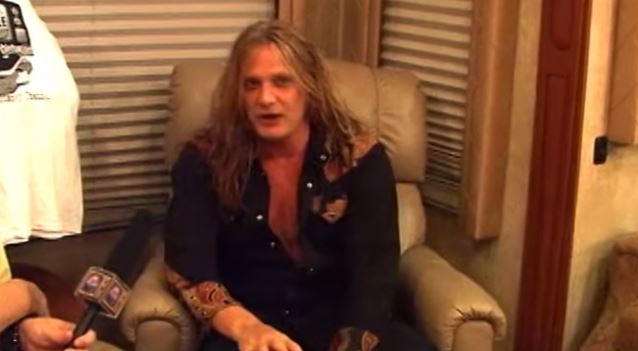 SEBASTIAN BACH Has Until End Of Year To Complete His Autobiography

On August 31, Mike Preston of Psycho Babble TV conducted an interview with former SKID ROW singer Sebastian Bach at the Farm Rock festival in Wauconda, Illinois. You can now watch the chat below. A couple of excerpts follow (transcribed by BLABBERMOUTH.NET).

On why he covered APRIL WINE's "Rock N' Roll Is A Vicious Game" on his latest album, "Give 'Em Hell":

Bach: "The song 'Rock N' Roll Is A Vicious Game' is my commentary on looking at some of the younger guys that are in bands that I've worked with — and I'm not talking about all younger bands. I'm talking I've had experiences with people that seem to think that they're, like, owed something. And I'm, like, dude, you have to give it a hundred percent of your life for the rest of your life. That's the only way somebody might relate to your music. If you put everything into your music, somebody might listen to it and say, 'Man, I can feel what he's feeling.' Like, look at a guy like Willie Nelson, who's in his 80s. He's not looking for handouts. He's on the road again. He just can't wait to get on the road again."

On his upcoming autobiography:

Bach: "I have to hand in my book to HarperCollins by Christmas, or January 1, so this is my whole focus now. I'm already quite into it, but now it's crunch time. My first impulse was not to have a typical book of, like, starting at your childhood, going through, and then you rise and then you fall and then you come back… that whole typical storyline. When I read Neil Young's book, 'Waging Heavy Peace', I'm a big Neil Young fan, and his book's not linear, it's not, like, 'Here's me as a kid, here's…' I just found it interesting. I like to be surprised. I don't like to be bored. Being bored is boring. But, having said that, when I read Paul Stanley's book, the story of how he was not famous, or KISS was not famous, and then they became KISS, and what that is like, to go from being a normal person and then being a rock star, that is fascinating to read by anybody, and I have that story. So, even thought I might not personally find that totally interesting to me, to the reader, to read about, okay, I was, like, a teenager and then a millionaire on television and touring the world, that's a fascinating story. So I wanna tell those details."