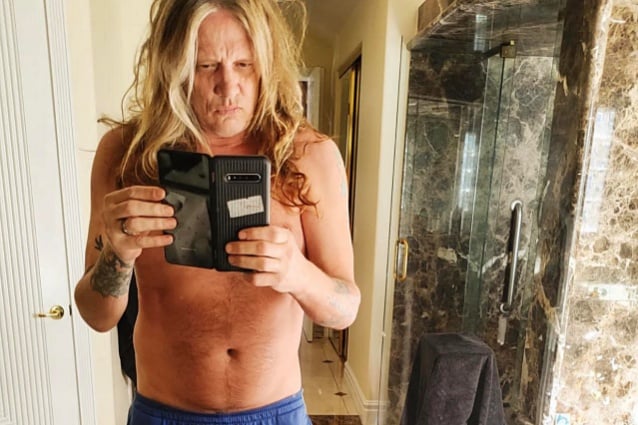 SEBASTIAN BACH: 'I Have Lost Around 35 Pounds Since August 2021'

Sebastian Bach says that he has lost 35 pounds in the last five months.

The former SKID ROW singer shared the news of his weight loss in an Instagram post earlier day. He posted a shirtless mirror selfie and included the following message: "In the spirit of Ms @britneyspears , here is a picture of me just waking up today looking in the mirror.

"Why am I posting this? For one simple reason: I have lost around 35 pounds since August 2021. Am I exactly where I want to be? Not yet. Am I heading in the right direction? You better believe it.

"Rock n' roll does a body good! So does completely changing your diet and exercising as much as possible. #Yoga running and always remember that abs are made in the kitchen!

In a 2011 interview with Guitar World, Bach stated about the amount of work that he puts into getting ready for a vocal performance: "I spend hours doing it. It's pretty much every day, and that's not even counting the hours I spend running to stay in shape. Doing sit-ups and push-ups and fucking all this crap. [Laughs] But I signed up to be the lead singer, so I know the rules. Nobody wants a fat lead singer. [Laughs]"

Bach recently completed a tour celebrating the 30th anniversary of SKID ROW's double-platinum, acclaimed album "Slave To The Grind". The trek kicked off on September 25 in Waterloo, New York and wrapped in San Diego, California on December 17.