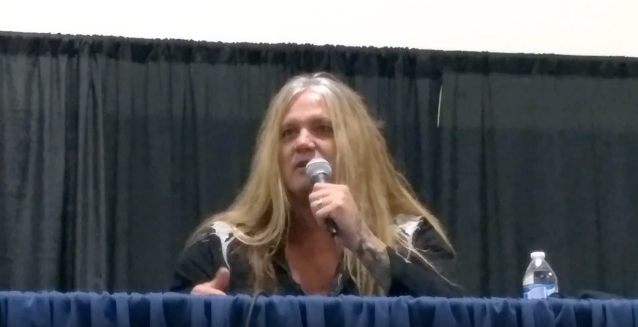 SEBASTIAN BACH On Why TED NUGENT Didn't Want DAMNOCRACY To Continue: 'He's Got Way Too Many Animals To Kill'

DAMNOCRACY was featured in the 2006 VH1 "reality" television show "SuperGroup". The premise of the series, which was filmed in February and March 2006, was to lock several musicians in a house for 12 days and get them to write and record some new original music. In addition to the five musicians, manager Doc McGhee (KISS) was in charge for the duration of filming/recording. The all-star band also performed a headlining set at the Empire Ballroom in Las Vegas.

Asked if there are any proper DAMNOCRACY recordings available to be released, Bach said (see video below, courtesy of Blue Bungalow Beats): "That session exists on my laptop. Ted Nugent didn't wanna make that a real thing. He's got way too many animals to kill. On top of his list are squirrels, rabbits, birds. Get 'em all. That's important. You can't go buy one at the store; you've gotta kill your own. I'm not against that, but… you know. I remember when he focused on the music more than that. That was the Ted I listened to. I've gotta go kill squirrels, grandpa. And then post a picture with a little kid, and the kid's like this [gives a horrified look]. 'I don't wanna kill a buddy.' Like, God, chill out on the murdering, dude. Ease up on the murders." He then added: "Okay, I'm gonna get in trouble for everything I just said."

Back in June 2006, DAMNOCRACY released rough demo versions of three songs — "Take It Back", "UltrAlive" and "Edge Of The World" — on the band's MySpace profile. At the time, Bach said that it was "more than a little frustrating to watch the show and see little to no footage of the band actually playing music. When I say on the show, 'Well, we jammed for six or seven hours today,' but they show none of it, it drives me nuts!" he explained. He added that the demos were "extremely low quality" with "zero production" and predicted that "f we ever cut these tunes, they would probably sound nothing like these demos."