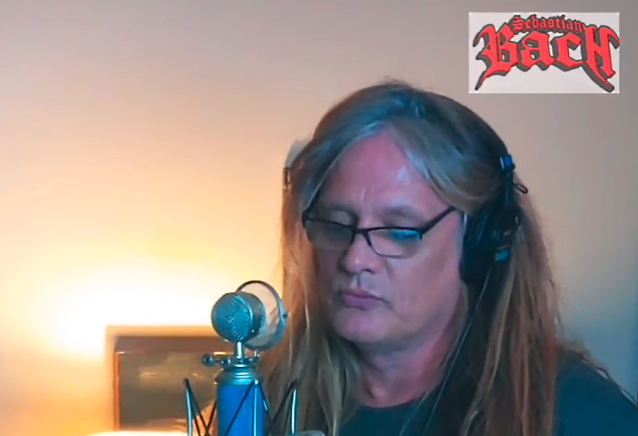 Bach uploaded the video to his social media, saying: "Bored in my house after seven months, decided to put on a record and sing a song for you.

"For all you audiophiles out there, what you are hearing right here is my voice panned either to the left or the right or both of Steve Perry's voice which is in the center which I left alone," he explained. "So technically this is a duet, my voice is louder in the mix than the track and you can hear us both. I do not have pro tools installed on my computer, this is at the most two of my voices in the chorus only. Crank it up right from my record room to yours!"

Back in 2018, Bach credited Perry with helping him expand his vocal range.

The former SKID ROW frontman praised the the ex-JOURNEY singer after spending time with Perry at a birthday party thrown by ALICE IN CHAINS guitarist Jerry Cantrell.

Bach posted a photo of him hanging out with Perry at the bash, and wrote in the accompanying note: "Got to spend the afternoon with one of my top two favorite singers on the planet, Steve Perry of JOURNEY fame. It was so great to see him again. We talked about the last time we saw each other which was way back in 1991 the day that Nikki Sixx asked me to join MÖTLEY CRÜE at their rehearsal in Hollywood, California. That day, Steve Perry was there and introduced me to his daughter, which, he told me, she still talks about to this day. Haha!

"It was incredible to see Steve who looked exactly the same as he always has and talk about how his vocals have helped me over the years.

"When I get ready to go on tour, I warm up to Steve Perry's incredible singing and it's helped me expand my range over the years, as you can hear on my last couple of studio records.

"Steve's voice is so incredible to listen to and such an inspiration to all vocalists worldwide."

Bach has spent the last few months demoing material for his next studio album. The LP is expected to include guest appearances and songwriting contributions from Orianthi, John 5, Steve Stevens, Devin Bronson, Brent Woods, Eli Santana and Jeremy Colson.

Bach hasn't released a full-length disc since "Give 'Em Hell", which came out in 2014.