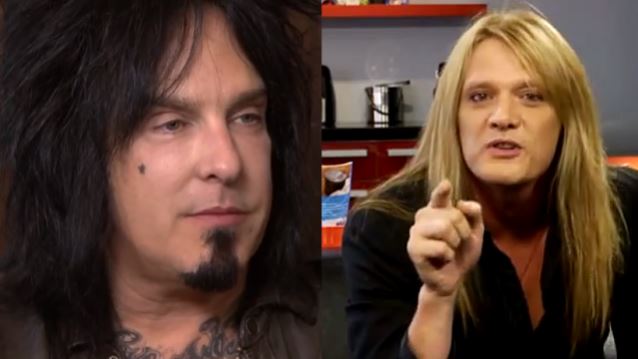 A couple weeks ago, MÖTLEY CRÜE and SIXX: A.M. bassist Nikki Sixx said Sebastian Bach should not allow himself to be referred to as "former SKID ROW singer" and suggested that Bach drop the SKID ROW tag and just go by his own name. Sixx explained (hear audio below),"I mean, at this point, dude, you've been out of SKID ROW long than SKID ROW was even alive. Like, let it go!"

VH1 Radio Network's Dave Basner caught up with Sebastian, who jokingly responded to what Nikki had to say. "I actually just [let go of the 'former SKID ROW singer' tag] this morning, I dropped it, so now I feel amazing," Sebastian said. "I just feel myself better as a human, 'cause I made the decision after I read him tell me that I should do that, 'cause I was wondering what to do and then I read that and I was, like, 'Oh, now I know!' I can't believe it took me so long. As soon as I read that interview, I was, like, 'Man, what would I do without somebody else telling me what I should do?' Because I was waiting for somebody to tell me what to do with my life and now, oh, thank… now I'm okay. Now I feel great."

After Bachrevealed in a a three-word tweet to a fan on August 29, 2013 that he was asked to join MÖTLEY CRÜE more than two decades ago, Sixxquickly retorted that Bach's version of events never happened. Sebastian then took to his Facebook page to describe in some detail the circumstances behind his being asked to join the CRÜE, which included taking part in a full day's rehearsal with the band and a slew of phone calls between various managers, agents and label executives. "I was driven to rehearsal by Tommy Lee, and I spent a full day singing the MÖTLEY CRÜE set with the band MÖTLEY CRÜE," Bach wrote. "I remember the songs that Nikki asked me to sing that day. I remember the whole road crew's ecstatic reaction to us jamming together all day. And I remember Nikki's very generous, kind offer, at the end of our rehearsal, for me to join the band MÖTLEY CRÜE. I remember his exact words that he said to me in front of his whole road crew, Tommy and Mick [Mars] as well. It's not every day that your hero asks you to join his band."

Bach didn't reveal the full details of what went down that day, promising his Facebook followers that he "will tell the complete story of Nikki offering me to join MÖTLEY CRÜE in my upcoming book, which will be arriving on bookshelves soon."

He added: "I am not simply 'making this up'… I am not a liar. I am working on my book right now and I look forward to you all reading it. I plan on my book having even more information in it than one of my tweets does."

On September 13, 2013, Nikki tweeted what appeared to be a short response to Bach's online rant: "Someone needs attention to try and sell some books." He then added: "I always liked the term 'washed up.'"