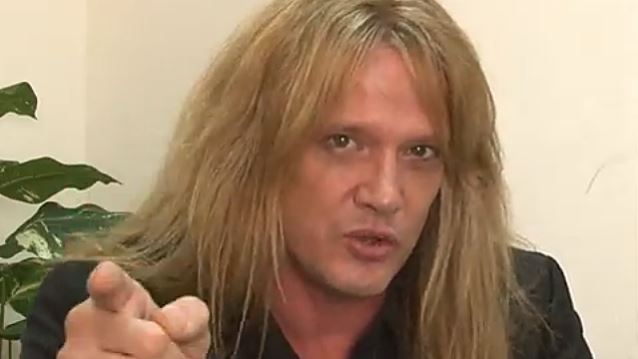 Former SKID ROW singer Sebastian Bach says that MÖTLEY CRÜE bassist Nikki Sixx's "memory is wrong" regarding whether Bach was once asked to replace Vince Neil as the frontman of MÖTLEY CRÜE.

Earlier this week, Bach responded to a question on Twitter, saying he was asked to join MÖTLEY CRÜE more than two decades ago. But Sixx disputed that account, telling the listeners of his "Sixx Sense" radio show that Bach's claim that was "absolutely not true. At the time that Vince left MÖTLEY CRÜE in 1990… '89… '90.. somewhere in there… '91… [Sebastian] was in SKID ROW and SKID ROW was on top of the world," Sixx said. "And [Dave] Snake [Sabo], their guitar player, was one of my very best friends. So I think I would remember that.

Sixx added, "Sebastian Bach was never part of this master plan, that's for sure. So I wanted people to know that."

"Well, it's not every day you wake up to one of your childhood heroes calling you a liar. Either that, or Nikki Sixx's memory needs some serious 'refreshing.'

"When I was a kid, we had magazines and journalists and interviews and articles and pinups and posters to follow our favourite artists. Nowadays? Twitter is actually the new rock magazine.

"Last week I answered one tweet with three words. Some fan asked me if I was 'ever approached to join MÖTLEY CRÜE.' My tweet, in response to this, was: 'not approached. asked.' Literally three words.

"I laughed that all of these supposed 'news outlets' have nothing better to do then go to my Twitter page to manufacture 'news' stories.

"None of these 'news stories' had any actual quotes by me. Or anything that I actually said. Every single article just copied and pasted my tweet.

"It is incredible to me that my Twitter feed is a source of 'news' for every rock news outlet around the world.

"Everybody knows that Nikki Sixx is in control of MÖTLEY CRÜE.

"And now today I wake up to the headline that Nikki Sixx himself is on his radio station actually talking about my tweet.

"Why people are constantly fixated on what happened in 1991 is completely beyond me. But that's just the way it is.

"What did they say about the '80s? If you remembered it, you weren't really there? A perfect example of this would be Nikki Sixx's book 'The Heroin Diaries'. In his 'diary,' Nikki tells a story about the 'Theater Of Pain' tour and how I kicked in the window of the CNE Stadium door on the afternoon of the show and let all of the fans in at three in the afternoon. Being that his book is a 'diary,' you would think that this would be accurate information. But in actual fact, this whole incident did not even happen on the 'Theater Of Pain' tour. In fact, this incident occurred on the 'Shout At The Devil' tour. About 3 or 4 years before 'Theatre Of Pain'.

"So does that mean Nikki Sixx's 'claim' that his 'book' is a 'diary' is 'absolutely not true?' Do I think Nikki Sixx is actually 'lying?' Not really. I am sure that all of the heroin and partying and drinking would affect a man's memory. The simple fact is that, I did indeed kick in the doors... on the 'Shout At The Devil' tour. Not the 'Theater Of Pain' tour.

"Who even cares? What does this even matter, anyways?

So, Nikki Sixx is either calling me a liar, or his memory is wrong in this instance. I am willing to assume the latter.

"The fact of the matter is I was not only asked to join MÖTLEY CRÜE… I actually REHEARSED with the band MÖTLEY CRÜE.

"I was driven to rehearsal by Tommy Lee [MÖTLEY CRÜE drummer] and I spent a full day singing the MÖTLEY CRÜE set with the band MÖTLEY CRÜE. In front of their whole road crew.

"It's not every day that your hero asks you to join his band.

"I remember everything about that day.... including what kind of sandwich Tommy Lee had for lunch.

"I will tell this complete story in my upcoming book.

"This was not just a simple offer to 'join a band.' I rehearsed with the band. I spoke to their management on the phone days later about Nikki's offer. It was a big deal involving record companies, management companies, and all sorts of business dealings.

"I will tell the complete story of Nikki offering me to join MÖTLEY CRÜE in my upcoming book, which will be arriving on bookshelves soon.

"I am not simply 'making this up.'

"Thank you all for enjoying my Twitter page so very much.

"I am working on my book right now and I look forward to you all reading it.

"I plan on my book having even more information in it than one of my tweets does."