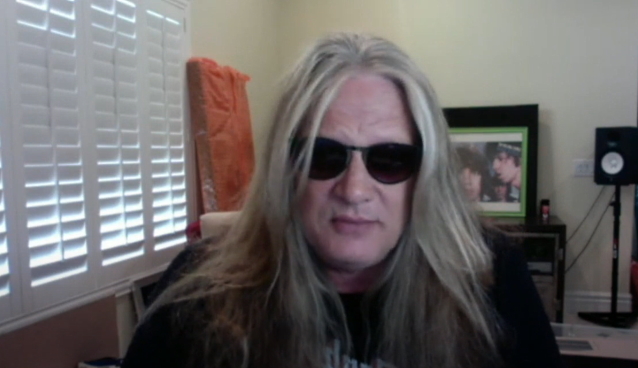 SEBASTIAN BACH Says 'There Is No Reason' Why Classic SKID ROW Lineup Shouldn't Reunite: 'We're Not Getting Any Younger'

Sebastian Bach says that "there is no reason" why a reunion of SKID ROW's classic lineup shouldn't materialize.

In 1999, SKID ROW reformed and, after a bit of shuffling over the years, featured a lineup consisting of bassist Rachel Bolan, guitarists Dave "Snake" Sabo and Scotti Hill, alongside drummer Rob Hammersmith and singer Johnny Solinger.

Asked in a new interview with Florida's 98.7 The Gater radio station if he can see himself ever reuniting with SKID ROW, Bach said (as transcribed by BLABBERMOUTH.NET): "Well, there's no reason not to — there's none. When those guys [in SKID ROW] try to say [about me], 'He's difficult to work with,' let me just say this one more time. We have not been in the same room together since the year 1996. Shut the eff up about you thinking you know what I'm like. You don't know anything about what I'm like. And the 'Gilmore Girls' think I'm okay to work with; Broadway thinks I'm okay to work with; the 'Trailer Park Boys' think I'm okay; GUNS N' ROSES think I'm pretty cool. We're not getting any younger."

As previously reported, Bach will celebrate the 30th anniversary of SKID ROW's classic second album, "Slave To The Grind", on a U.S. tour this fall. He will perform the LP in its entirety at all shows on the trek, which will kick off in October.

In June 2019, Bach issued an "open invitation" to the other members of SKID ROW's classic lineup to "get onstage and jam" during the vocalist's last tour. A few days later, during an interview with Finland's Kaaos TV, guitarist Dave "Snake" Sabo confirmed that he would not accept Bach's overture. "I'm working with my band," he said. "This is SKID ROW, and this is what I do."