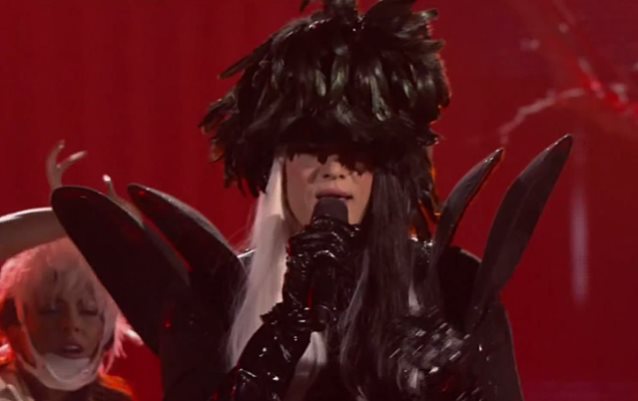 Former SKID ROW vocalist Sebastian Bach spoke to Über Rock about his recent appearance on ABC's latest singing competition "Sing Your Face Off", where he had to take on the identity of some of music's famous faces such as into Willie Nelson, Lady Gaga, Adam Levine from MAROON 5 and Freddie Mercury of QUEEN.

"You have to do what you have to do," he said. "The first one, I let them do it their way. That was Adam Levine, and I wasn't happy with it. So the next one was Lady Gaga and I flicked a switch in my head and I said, 'Sebastian, now it's time for you to fuckin' rock! No matter what, do it for your fans, do it for yourself.' So they had this outfit that they wanted me to wear that was like some girls red chiffon thing, and I go, 'I'm not fuckin' wearing that. I'm not wearing that on your show. I'm not wearing that ever.' So we got pictures of Lady Gaga and found something that suited my persona, because she's a real metalhead. She really loves metal, and she's a very theatrical performer. So they showed me this picture of her in this black, kind of KISS-like shoulder thing and I had big antlers on my head, like Angelia Jolie, which was weird because that 'Maleficent' movie came out the week that I was doing that. It was, like, the same look. But what's funny is that the very next day after I did that, Lady Gaga started wearing a SKID ROW shirt and she also started following me on Twitter, so it's pretty crazy and kinda cool."

Unfortunately, after four weeks, Sebastian had the lowest score and was sent home from the show. On June 14, however, Bach returned with fellow contestant, actor/comedian Jon Lovitz, on the program's season finale for a rousing rendition of LMFAO's "Sexy And I Know It".

ABC launched "Sing Your Face Off" on May 31. The show was described as a talent variety competition where celebrities are transformed and trained to perform as a legendary musical icon. Over the course of the series, five personalities — Bach, Lovitz, basketball star Landry Fields, singer China Anne McClain ("A.N.T. Farm") and actress Lisa Rinna ("Days of Our Lives") — took on the identity of an iconic music performer. Debbie Gibson and Darrell Hammond were the primary judges.

Bach spoke to Afterbuzz TV about his experience on the show, including his controversial departure. Bach explained: "I was supposed to stand there and get eviscerated… and I just split… Let me paint the picture for you, my manager was running after me… and I literally… ripped my nose off and threw my nose off, so there's like a nose on the floor."

Despite repeatedly mentioning he was unhappy with Gibson's scores for him, Bach enjoyed getting to know the celebrity contestants and creating friendships. "It's a fun show," he said.