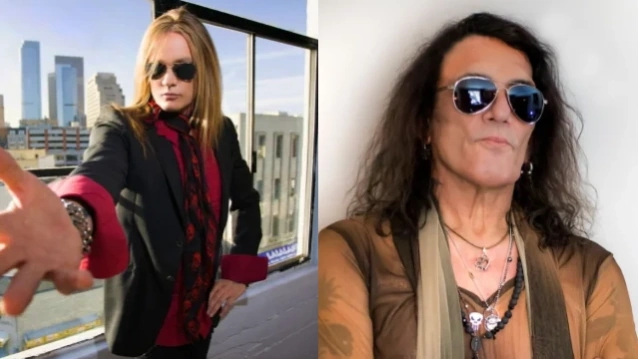 Sebastian Bach has told Stephen Pearcy to "stop embarrassing" himself after the RATT singer came under fire for implying Americans should refrain from wearing a cloth face mask or covering in public even though it protects against the coronavirus.

Many Americans refuse to wear a mask for they view it as a symbol of oppression and how government can dictate their actions. President Donald Trump has been loath to wear a mask, despite the advice of public health experts.

Late Wednesday night (July 1), Pearcy took to his Twitter to share the hashtag #UnMaskAmerica, eliciting a number of disapproving responses from his followers. Pearcy later deleted his original tweet and shared a photo of himself with braided hair, holding a Robbin Crosby guitar while wearing a mirrored face mask with the caption: "Maybe if we all wear this mask, we can all have peace. Or we can wait for the real guys to come down and straighten things out. I'm waiting for the Ass kicking" In response to Stephen's tweet, Bach wrote: "Dude this shit is actually not funny. Please stop embarrassing yourself and all of rock and roll"

Later on Thursday, Pearcy tried to explain away his #UnMaskAmerica tweet, writing: "I only apologize for things that hurt my audience, politics leave me the fuck out, don't be starting shit. Not into it. Not for press, not for nothing. Note; If my post was so far above heads I'll explain. ALL peoples, races, if we had the same face (Extraterrestrial alien) no prejudice. Peace." He added: "#mask or do as you please. That was an unfinished post."

Maybe if we all wear this mask, we can all have peace. Or we can wait for the real guys to come down and straighten things out?I’m waiting for the Ass kicking☠️ pic.twitter.com/cZtSHDN7GK

Dude this shit is actually not funny. Please stop embarrassing yourself and all of rock and roll

My response. I don’t give a fuck??as Mr Jimi Hendrix said once, “I’m the one that’s got to die when it’s my turn to die, so let me live my life the way I want to.” ?? “Give a man a mask and he will tell the truth”. Oscar Wilde ☠️Here’s my other mask. ??☠️ pic.twitter.com/CXfM9AeKRb

Hey. Who who people. #mask or do as you please. That was an unfinished post. ?? pic.twitter.com/pvg8TEvpzn

I only apologize for things that hurt my audience, politics leave me the fuck out, don’t be starting shit. Not into it. Not for press, not for nothing. Note; If my post was so far above heads I’ll explain. ALL peoples, races, if we had the same face (?) no prejudice. Peace. ????

Calm down do as you will, we follow protocol. Now go rock out @theRATTpack

Nothing to do with whos fucking wearing a mask or doesn’t. I do, next.??NOT into politics that are not my own. #letsrattnroll #rattproblem