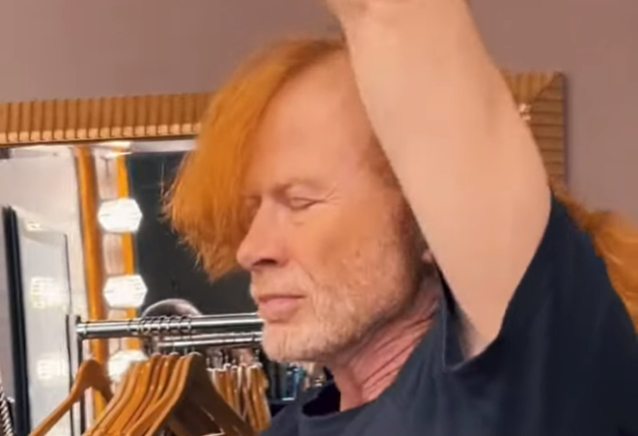 Professor Reggie Almeida of the Gracie Barra Brazilian jiu-jitsu school in Spring Hill, Tennessee, who has been traveling with MEGADETH on "The Metal Tour Of The Year", has uploaded a YouTube short of guitarist/vocalist Dave Mustaine's pre-show workout routine. The clip, which was filmed in Dave's dressing room prior to MEGADETH's May 13 concert at the Mohegan Sun Arena in Uncasville, Connecticut, can be seen on YouTube at this location.

In January 2021, Mustaine earned a purple belt in jiu-jitsu. The now-60-year-old musician was promoted to the new rank almost two years after earning the first stripe on his blue belt. He was promoted by Almeida, who leads Gracie Barra near Mustaine's hometown of Franklin.

As the middle belt, purple is when a jiu jitsu player begins to form his or her identity within the grand scheme of the sport.

In a 2007 interview, Mustaine said he started training taekwondo in 1999 in Arizona and then moved to California, where he lived until a few yeas ago. "Before taking up taekwondo, I practiced kung fu and other martial arts," he said.

Mustaine told The Quietus in 2010 that he had "a first degree in Ukidokan karate. My sensei — Benny 'The Jet' Urquidez — has the style of karate, kung-fu, aikido, judo, ju-jitsu, taekwondo, Greco-Roman wrestling, Muay Thai boxing and American boxing," he said. "So it's all those things rolled into one. It's a nine-style discipline. My second black belt is in Songham taekwondo and I was an assistant instructor in that style, and then I taught it privately for a while."

Mustaine celebrated his 60th birthday on September 13, 2021 at MEGADETH's concert at the Leader Bank Pavilion in Boston, Massachusetts. At the show, the audience sang "Happy Birthday" to Dave, after which a five-minute video was played in which a number of other musicians shared their best wishes to Mustaine, including GUNS N' ROSES' Slash, Ozzy Osbourne, MÖTLEY CRÜE's Nikki Sixx, KORN's Brian "Head" Welch, Ice-T and members of LAMB OF GOD and TRIVIUM.

An early member of METALLICA before being kicked out in 1983, Mustaine feuded with his former bandmates for more than two decades before finally patching things up over the last decade.