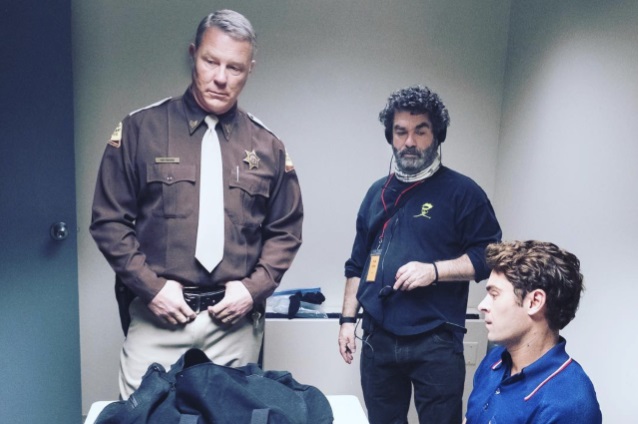 METALLICA frontman James Hetfield has joined the ensemble cast of the upcoming thriller "Extremely Wicked, Shockingly Evil, And Vile". The film follows the relationship between notorious serial killer Ted Bundy, played by Zac Efron, and his longtime girlfriend, played by Lily Collins, who at the time had no knowledge of Bundy's crimes. Hetfield will play officer Bob Hayward, a Utah highway patrol veteran who was the first law enforcement officer to arrest Bundy in 1975.

The first photo of Hetfield on the set of "Extremely Wicked, Shockingly Evil, And Vile" has just been released and can be seen below.

While Hetfield has played himself in other films and TV productions, along with doing voiceover work, this will be his first dramatic role in a live-action feature film.

Hetfield used to be very shy in his younger days and told The Pulse Of Radio that he used to play up his "tough-guy" persona. "There's no doubt that I played into the image that was portrayed in the press, portrayed in people's description of why they liked METALLICA," he said. "I didn't want to disappoint. I wanted to be that guy. I wanted to put that mask on, and then keeping the mask on 24 hours became suffocating, and I could not do it anymore."

"Extremely Wicked, Shockingly Evil, And Vile" is in production now and is being directed by Joe Berlinger, one of the co-directors of the 2004 documentary "Metallica: Some Kind Of Monster".

Berlinger said in a statement: "Having spent hundreds of hours behind the scenes with James and the rest of METALLICA, I have experienced his charisma and powerful presence close up. It seemed only natural that he would bring that same power and magnetism to a dramatic role, so when he agreed to my pitch that he be in the movie, I was thrilled."

A release date and distributor for the film have yet to be announced.

A #special #day on #set of our little #bundy #movie starring @zacefron and @lilyjcollins ... @metallica is in the house as @james.hetfield @papa_het_ plays Officer Bob Hayward in the #metal #god 's #first #dramatic #role #cleancut Having one of my #musical #heroes in our #film is #pretty #damn #awesome Photo by @brian_douglas_stills