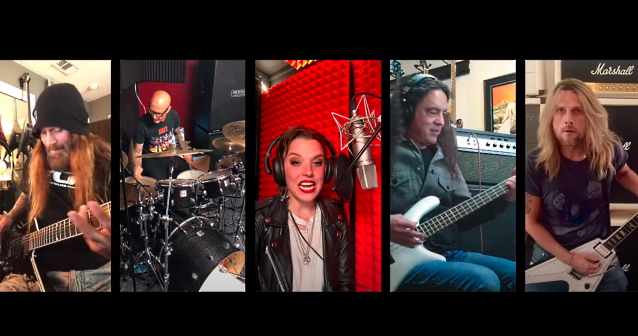 Richie Faulkner (JUDAS PRIEST), Mike Inez (ALICE IN CHAINS), Lzzy Hale (HALESTORM), Phil Demmel (VIO-LENCE, ex-MACHINE HEAD) and Dave McClain (SACRED REICH, ex-MACHINE HEAD) recently joined forces to to record a cover version of THIN LIZZY's "Bad Reputation". The accompanying video was shot in quarantine, with each musician separated in his or her home, and can be seen below.

In a statement accompanying the YouTube release of "Bad Reputation", Demmel said: "After [my wife] Marta and I had so much fun doing 'No Excuses', I invited my buds Dave McClain (Sacred Reich/Machine Head), Richie Faulkner (Judas Preist), Mike Inez (Alice in Chains, Ozzy, BLS, pretty much every band) and resident Bad-Ass Lzzy Hale to jam on one of my favorite tunes by one of my favorite bands Mixed by Paul Fig, Vid edit by Todd Shuss."