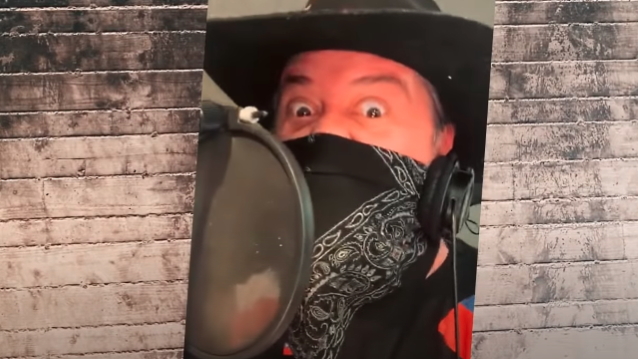 A month after sharing "quarantine versions" of the STORMTROOPERS OF DEATH songs "March Of The S.O.D." and "Chromatic Death", recorded with each member separated in their own homes, Charlie Benante (ANTHRAX),Scott Ian (ANTHRAX) and Dan Lilker (NUCLEAR ASSAULT, ex-ANTHRAX) have returned with another S.O.D. track, "Speak English Or Die", the lyrics of which have been switched up to "Speak Spanish Or Die". Joining the trio on vocals is MR. BUNGLE and FAITH NO MORE singer Mike Patton, who previously performed the same track with Ian and ex-SLAYER drummer Dave Lombardo at the MR. BUNGLE reunion shows in February. Patton makes an appearance in the accompanying video as "The Lonely Rager," complete with cowboy hat and bandana mask.

STORMTROOPERS OF DEATH (a.k.a. S.O.D.) was a satirical 1980s metal band which consisted of Ian (guitar),Benante (drums),Lilker (bass) and M.O.D.'s Billy Milano (vocals).