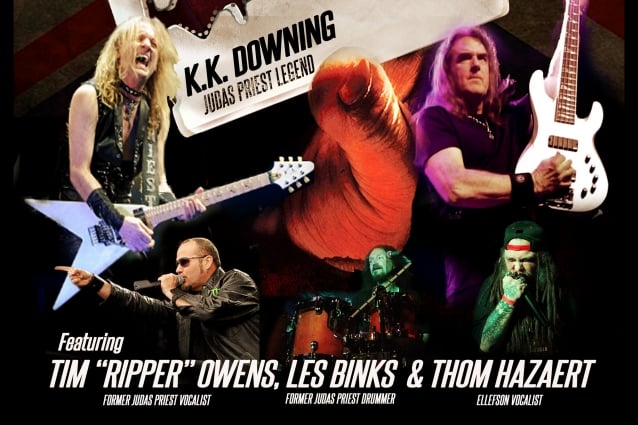 Former JUDAS PRIEST members K.K. Downing (guitar),Les Binks (drums) and Tim "Ripper" Owens (vocals) will team up to perform "a full-length set of PRIEST classics" with MEGADETH bassist David Ellefson on November 3 in Wolverhampton, United Kingdom. Joining them on second guitar will be A.J. Mills of HOSTILE, the British metal band whose two albums, "Eve Of Destruction" and "The New World Disorder", were both produced by Downing.

Several photos from the rehearsal sessions for tommorow night's concert can be seen below.

A post on Downing's Facebook page states: "Following Killer rehearsals and some history being made, we are all systems go for THIS SUNDAY in #wolverhampton.!! If you don’t have your £10 ticket for this event you WILL be missing out.... go to www.kkssteelmill.co.uk Or TicketWeb UK See ticket Gigantic Tickets"

During an appearance on SiriusXM's "Trunk Nation", Downing talked about how the gig came about.

"Dave had this idea, 'cause he was coming up to the U.K. He wondered if I would join him in the celebration of the release of his new book," K.K. recalled. "And just through telephone conversations, it was a case of, 'What about this?' and, 'What about if we do that?' And the next thing was, I'm involved with this really quite large venue in the U.K. So I said, 'Why not? We'll come up to the Steel Mill and play a show and make a really good event of it.' So that's what it's gonna be. On the night, there'll be me, Dave, Ripper, Les Binks and a great guest guitar player, A.J. Mills, who is a player also from the Birmingham area. So that's a pretty good fit with the roots of PRIEST. And A.J. looks good, plays good and performs good, and I like that. And it's gonna be a great show… And also we've got the interview with various personnel — definitely Dave, obviously, because it all surrounds his evening — with interviews, questions and answers. And it's just gonna be a big celebration, really, party event. Kind of a 'MegaPriest' fest, I think. We're really looking forward to it."

💀🔥...Following Killer rehearsals and some history being made, we are all systems go for THIS SUNDAY in #wolverhampton.!!...