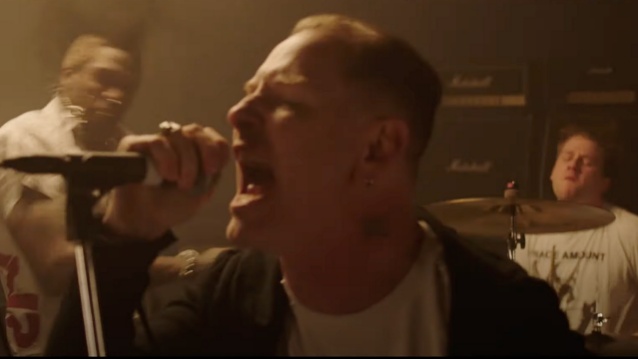 SLIPKNOT's Corey Taylor makes an appearance in "Bite My Face", the new music video from HO99O9 (pronounced "horror"). The track is taken from HO99O9's new album "Skin", which is being released today (Friday, March 11). The follow-up to 2017's "United States Of Horror" was produced entirely by BLINK-182 drummer Travis Barker and is being made available via Barker's DTA Records.

When the duo of Yeti Bones and theOGM kicked in the doors of the music industry in 2014 with an iconically off-the-rails set at the Afropunk festival, they set a noisy new standard for industrial-grade, punk-influenced hip-hop, colliding the DMX and BONE THUGS they grew up listening to in Jersey headfirst with bands like BAD BRAINS and the NINJASONIK that they absorbed after discovering the NYC DIY scene. With a steady stream of mixtapes, EPs, singles, and their debut LP "United States Of Horror", they've continued to raise the bar for sonic chaos, drawing critical raves, building a cultishly devoted following, and earning the respect of iconic audio anarchists like Mike Patton (who invited them to open for MR. BUNGLE and DEAD CROSS) and THE PRODIGY (who featured them on the 2018 single "Fight Fire With Fire").

In 2019, a mutual friend introduced them to Travis Barker, and a get-to-know-you studio session quickly resulted in the pummelling track "Nuge Snight". Soon after, the pandemic hit and the world turned upside down, but the trio kept working off and on over the course of 2020 and 2021, with Barker on drums and production duties. As the situation outside the studio got more tumultuous, Yeti Bones and theOGM got rawer, finding new ways to channel the rage that's always animated their music — rage that the rest of the world was feeling more and more every day — and peeling back what little pretense they had to reveal their most unapologetically honest selves. Eventually, they realized that they had an album on their hands. Taking inspiration from an Ice Cube B-side, they named it "Skin".

"Skin" is the sound of HO99O9 finding new levels to their talents, then crashing through them to go even higher. It's somehow even noisier and more aggressive than their earlier work — mosh pit music for the end of the world that keeps the needle buried deep in the red — but there's also a fresh focus to the chaos. If listening to early HO99O9 was like getting jumped by a mutant street gang, "Skin" is like facing off against a couple of martial arts masters who know precisely where to land each blow to cause maximum impact. Lead single "Battery Not Included" pivots effortlessly from breakbeat industrial mayhem to hardcore breakdown to a completely unexpected soothing interlude — before going right back to beatdown mode. The slow-grind "Speak Of The Devil" spotlights the newfound emphasis on melody that the pair bring to the table. The album also brings together Yeti Bones and theOGM with some of their biggest influences and most illustrious supporters: "Slo Bread" sends Houston rap into a nightmarish new dimension with help from H-Town trailblazer Bun B; "Skinhead" brings together street punk and poet Saul Williams; and the merciless "Bite My Face" gets a brutal vocal assist from Taylor.

HO99O9's spring U.S. tour will kick off April 15 in Los Angeles and runs through May 14 in Houston. Following the headlining run, HO99O9 will link up with SLIPKNOT and CYPRESS HILL for the second leg of the "Knotfest Roadshow" tour beginning on May 18.