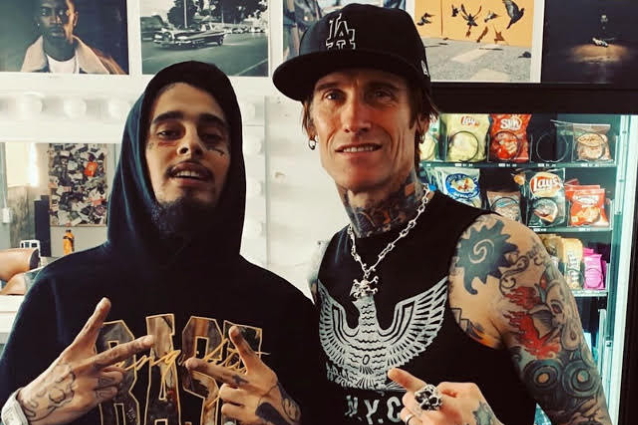 Californian rockers BUCKCHERRY have teamed up with American rapper and songwriter Isaiah Rivera, better known by his stage name Wifisfuneral, for a remix of their smash hit "Crazy Bitch". The official music video for "Crazy Bitch (The Butcher Mix)" can now be seen below.

Shot on location in Los Angeles, the "Crazy Bitch" remix video was produced and directed by Mungo Creative Group, which has previously worked with DJ Khaled, Wu-TANG CLAN, SEETHER, Ice-T, THE PRETTY RECKLESS, and many more.

The 2020 version of "Crazy Bitch" was produced by Joe "The Butcher" Nicolo (from the Butcher Bros. team) in collaboration with Tyler Nicolo and BUCKCHERRY guitarist Stevie D. Joe Nicolo and the Butcher Bros. have been nominated 13 times by The Recording Academy and have won nine Grammys to date. They have worked with an array of awe-inspiring artists that include NINE INCH NAILS, THE ROLLING STONES, NAS, and many more. Joe Nicolo also served as co-founder of Ruffhouse Records (FUGEES, LAURYN HILL, WYCLEF JEAN).

Josh Todd from BUCKCHERRY comments: "From the birth of 'Crazy Bitch', it came to me as a hip-hop track and that being said, I always wanted to do a collaboration with a hip-hop artist. Wifisfuneral is super talented and after sifting through potential featured artists he was our first choice and was down for the cause."

Wifisfuneral offers: "It's really relatable. I mean…haven't we ALL dealt with a crazy one somewhere along the way?!"

The original version of "Crazy Bitch" appeared on BUCKCHERRY's multi-platinum third album, 2005's "15". Todd discussed the LP's unexpected success during a recent appearance on the "Appetite For Distortion" podcast. He said: "This is when MySpace is happening, and 'Crazy Bitch' was getting all these views or listens... people were playing that song," he recalled. "It was over a million, and we were, like, 'Oh my God — what is going on with this song?' All of a sudden, radio DJs started editing a clean version of the song and put it on the radio. We didn't even ask. We were like, 'Oh my God — this song's taking off on its own,' and we jumped on 'Crazy Bitch'… And it just changed the scope of our career... It almost didn't even make the record. It had been sitting around for a while. We just thought it would be a good crowd tune — like, our core fans would really like it and it'd be fun to play live. We didn't think much of it because of the lyrical content."

In a separate interview with Vegas Rocks! magazine, Todd stated about the inspiration for "Crazy Bitch": "The idea came to me when I was driving around in L.A. at the time. Paris Hilton put out these sex tapes — or, I don't think she put them out; I don't know how they came out. But basically, she launched her entertainment career with some homemade porn, and I just thought that was funny. Then I started reminiscing about my youth, and I had a lot of crazy girls that I had met when I was younger. I just started singing [the] chorus of 'Crazy Bitch', and I just wanted to record it. I think I called my mom, because I didn't have an iPhone or anything at that time. I called my mom to record it on her [answering] machine so I wouldn't forget it. I just said, 'Don't erase this — I want to remember it. We'll talk about it later.'"

BUCKCHERRY is continuing to tour in support of its latest album, "Warpaint", which was released in March 2019 via Century Media/RED Music. The 12-song record was produced by Mike Plotnikoff, whose previous collaboration with the band was the aforementioned "15".