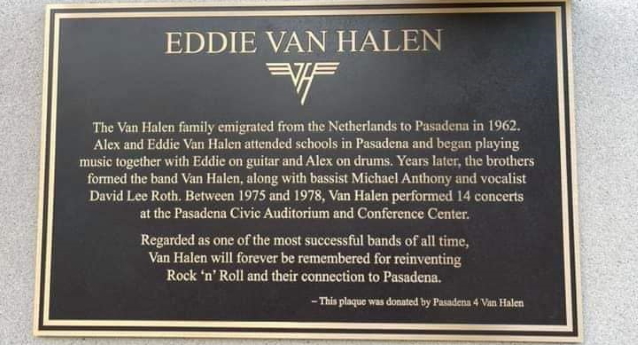 A memorial honoring legendary VAN HALEN guitarist Eddie Van Halen in his former hometown of Pasadena, California was officially unveiled on October 11 — a little over a year after his death. A six-and-a-half-minute video of the ceremony (courtesy of Pasadena Media) can be seen below.

Pasadena Mayor Victor Gordo and council members Tyrone Hampton, Andy Wilson, Gene Masuda and Felicia Williams watched as a plaque was presented near the city Convention Center, which is next to the Civic Auditorium, where VAN HALEN played a number of times between 1975 and 1978.

"This event brings together history and community to celebrate a world-renowned artist," Williams said, according to Pasadena Now. "It's not just the history of Eddie as a guitar legend, but also the challenges he faced growing up mixed race in Pasadena, which always spoke to me. And the community support and initiative to make this happen is inspiring. Thank you to everyone."

The text on the plaque reads: "The Van Halen family emigrated from the Netherlands to Pasadena in 1962. Alex and Eddie Van Halen attended schools in Pasadena and began playing music together with Eddie on guitar and Alex on drums. Years later, the brothers formed the band VAN HALEN, along with bassist Michael Anthony and vocalist David Lee Roth. Between 1975 and 1978, VAN HALEN performed 14 concerts at the Pasadena Civic Auditorium and Conference Center. Regarded as one of the most successful bands of all time, VAN HALEN will forever be remembered for reinventing Rock 'n' Roll and their connection to Pasadena."

The public was not invited to the ceremony due to coronavirus protocols. The musician's family was also not present due to scheduling conflicts, officials said.

The memorial tribute push was spearheaded by Randa Schmalfeld and Julie Kimura, two Pasadena residents who raised $6,500 through GoFundMe donations from fans from around the world for a permanent memorial in the city.

This past April, Pasadena Now reported that the Eddie Van Halen memorial near the city Convention Center could not — due to legal issues — contain Van Halen's likeness or his famous "Frankenstrat" guitar.