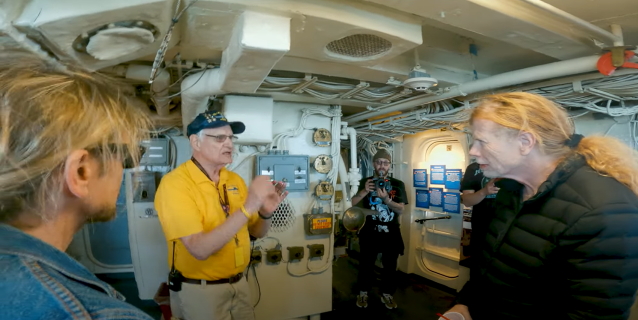 Professor Reggie Almeida of the Gracie Barra Brazilian jiu-jitsu school in Spring Hill, Tennessee, who has been traveling with MEGADETH on "The Metal Tour Of The Year", accompanied guitarist/vocalist Dave Mustaine and bassist James LoMenzo when they paid a visit to the USS Lexington Museum ahead of MEGADETH's April 14 concert at American Bank Center in Corpus Christi, Texas. You can watch part one of Almeida's video recap of the visit below.

Mustaine and LoMenzo got a tour of the Blue Ghost, the longest-serving Essex-class aircraft carrier of World War II. The ship was decommissioned in 1991 and converted to a museum in 1992.

USS Lexington thanked the musicians for their visit, writing in a social media post: "It's always a pleasure welcoming exceptional guests aboard the USS Lexington Museum! Thank you MEGADETH for visiting, we hope you enjoyed your tour! Rock on!"

During World War II, the carrier participated in nearly every major operation in the Pacific Theater and spent a total of 21 months in combat. The ship's planes destroyed 372 enemy aircraft in the air, and 475 more on the ground. The ship sank or destroyed 300,000 tons of enemy cargo and damaged an additional 600,000 tons. The ship's guns shot down 15 planes and assisted in downing five more, according to the museum's site.

From the very first day of operation as a naval aviation museum, the USS Lexington has remained totally self-sufficient, never having received funds from local, state or federal government agencies. The Museum has relied solely on revenues generated from grants, donations, admissions, ship's store sales, special events, and the youth overnight program. These revenues have covered all expenses not only to operate and maintain the ship but also to fund all capital improvements as well.

MEGADETH is currently on the road in North America with LAMB OF GOD as part of what is being called "The Metal Tour Of The Year". Also appearing on the bill are TRIVIUM and IN FLAMES.

American Bank Center is an entertainment complex with a capacity of 10,000 that hosts numerous conventions, trade shows, exhibitions, live performances, and sporting events for the Corpus Christi IceRays.

It’s always a pleasure welcoming exceptional guests aboard the USS Lexington Museum! Thank you Megadeth for visiting, we hope you enjoyed your tour! Rock on 🤘😎

Posted by USS Lexington Museum On The Bay on Thursday, April 14, 2022