Seminal Metal Label NOISE RECORDS To Be Relaunched By BMG

According to Billboard.com, BMG will relaunch the seminal metal label Noise Records.

Noise was a German record label founded by well-known industry figure Karl Ulrich Walterbach. Walterbach had originally started Modern Music Records in Berlin, with a two-pronged approach of promoting German-speaking punk bands (SLIME, DAILY TERROR and TOXOPLASMA) and licensing American bands such as BLACK FLAG, MISFITS and THE ANGRY SAMOANS. From this base, he developed the Noise label in 1983, specializing in thrash metal bands such as KREATOR, TANKARD, CORONER and SABBAT but also successfully diverting into other genres such as power metal (HELLOWEEN),heavy metal (RUNNING WILD) and the extreme metal of CELTIC FROST. The label quickly became the leading European player in its field, with Hamburg-based HELLOWEEN topping charts around the world with their "Keeper Of The Seven Keys" album, while "Part 2" sold in excess of a million albums in the late eighties. During the early nineties, after signing directly to previous distributor EMI, the band became embroiled in a legal dispute with Noise, which was eventually and unequivocally settled in favor of the label. Noise also administrated a number of other imprints — Machinery was best known for its industrial and experimental acts, such as OOMPH! and CARBONATE, while T&T brought more melodic rock bands to the Noise roster and released albums by the likes of VIRGIN STEELE, STRATOVARIUS and ELEGY.

Noise was eventually acquired as part of the Modern Music Group by Sanctuary in 2001, before being purchased by BMG in 2013.

The Noise relaunch will begin with a reissue campaign starting in May. Planned releases include a series of best-of compilations and reissues from CELTIC FROST, HELLOWEEN and VOIVOD.

"The Noise label made an invaluable contribution to metal music as home to a long list of artists who helped define the genre as we know it today," said Peter Stack, BMG executive vice president global catalogue recordings, announcing the label's return. "I'm really excited about giving Noise's rich heritage a new lease of life in 2016 and beyond." 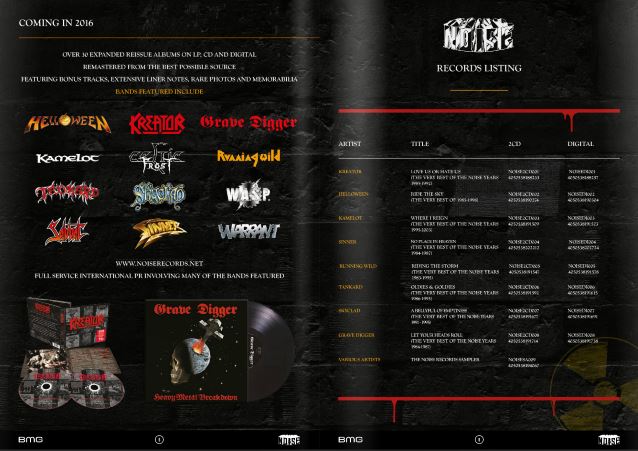