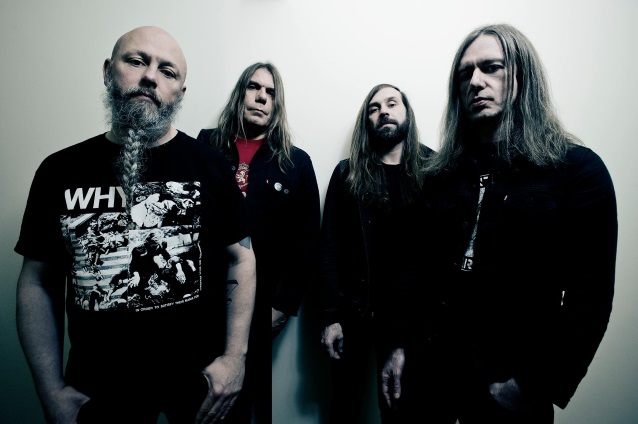 SEPTIC TANK, the long-running project featuring vocalist Lee Dorrian (CATHEDRAL),guitarist Gary Jennings (CATHEDRAL) and bassist Scott Carlson (REPULSION),has completed work on its debut album, "Rotting Civilisation". The disc, which was recorded and mixed by producer/engineer Jaime Gomez Arellano at Orgone Studios, will be released on April 13, 2018 via Rise Above Records.

"Rotting Civilisation" will feature 21 raging tracks of "metallic hardcore thrash." The band's musical influences range from HELLHAMMER, DISCHARGE, SLAUGHTER through to MOTÖRHEAD, TANK, SEPTIC DEATH, SIEGE, CRUCIFIX, BATTALION OF SAINTS and many more of the musicians' favorites from early to mid-'80s.

Earlier this year, Lee stated about SEPTIC TANK's musical approach: "SEPTIC TANK actually does have some very fast tracks, as well as the more general DISCHARGE kind of speed."

Originally formed in 1994 as a side-project of CATHEDRAL, SEPTIC TANK played a gig in London, U.K. on May 3, 2013 as an opening act for REPULSION and NECROPHAGIA.