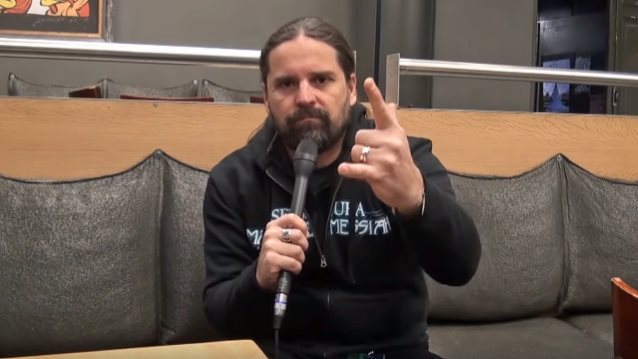 Andreas Kisser says that his former SEPULTURA bandmates Max and Igor Cavalera are "not doing anything new" by performing the group's classic album "Roots" in its entirety.

Asked by Finland's Kaaos TV about the trend in recent years of artists — including the Cavalera brothers and ANTHRAX — playing cornerstone albums from beginning to end in concert, the SEPULTURA guitarist said (see video below): "I don't know. I mean, every band has a reason or a history behind [it]. ANTHRAX is doing 'Among The Living' [on the current European tour], but they have two great new albums ['Worship Music' and 'For All Kings'], which really brought them up. It was not 'Among The Living' touring that did that. So they are now in a position, really, to celebrate and do something that they can enjoy, and play new music as well. Not only ANTHRAX, but METALLICA came with a great album, SLAYER, MEGADETH, DEATH ANGEL and TESTAMENT… Fantastic! You know, KREATOR and so many bands that, besides the tradition and more than thirty years on the road and doing stuff, [they are] playing new music. We are playing five songs [from the latest SEPULTURA album, 'Machine Messiah'] in our set that we have on the tour, which is a record for us. But it's great because people are really listening to the album — they don't expect only to hear the old stuff. We did that on the thirty-year-celebration tour — we played a lot of the old stuff, the classics — but now it's time for 'Machine Messiah', and that's what we're playing now."

He continued: "With regards to [Max and Igor playing] 'Roots', I think it's kind of a… I don't know… Max and Igor are not doing anything new, basically — they are kind of relating too much on the past, which, I think, is very different from what ANTHRAX, for instance, are doing right now. But, you know, people are free to do whatever they want. It's their choice of a career doing that. If it's only what they have, they should use it, I guess."

Asked if he can see the current lineup of SEPULTURA ever playing some of the classic albums, like "Chaos A.D.", live in their entirety, Andreas said: "Yeah, we did that a few times, but not as part of a tour. We did it in São Paulo [Brazil] — we played the whole 'Arise' [album] as a celebration of this metal/rock club in São Paulo. And then 'Chaos A.D.', we did also the whole album in a project as well in São Paulo, which many different bands did classic albums and stuff; I think it was it was three shows in São Paulo. It was amazing. It was cool. But really specific stuff like that."

He continued: "We're so excited and enjoying the momentum of 'Machine Messiah', we worked so hard to put this album out, and we have a great label behind [us], it would be kind of ridiculous to go there and do stuff [like that]. It's something that we can do, maybe in the future. Who knows? I mean, it's a possibility. But it's something that is not a part of our plans right now. I think we really focus on the new stuff and that's where we put all our energy and effort."

Max recently slammed the current lineup of SEPULTURA, implying in an interview that the band hasn't written any high-quality material since his exit from the group more than two decades ago. "Tell me one great song they have written since I left," he told Metal Rules. "Name one great album they have put out after that. I haven't seen anything. I don't know one name of one song as popular as 'Roots Bloody Roots'. So, it just tells me like whatever they are doing, I don't know how they keep on going. I don't think it's working at all. But somehow they keep on going, somehow. It's crazy to me."

In 1996, Max left SEPULTURA after the rest of the band fired his wife Gloria as their manager.