Brazilian/American metallers SEPULTURA will embark on a European tour in late 2021. Support on the trek will come from SACRED REICH and CROWBAR.

Tickets go on sale on Wednesday, December 16 and can be purchased here.

SEPULTURA frontman Derrick Green comments: "It’s been a challenging year for all of us around the world, and we are extremely excited to get back on the road again. We look forward to rocking out with you all again very soon!"

SEPULTURA guitarist Andreas Kisser adds: "We cannot wait to return to the stage to jam our new album, 'Quadra', and some old tunes of our career. Europe is the territory I enjoy the most to play, and we all miss you so much. See you all soon SepulNation, keep safe and well!"

SACRED REICH's Phil Rind states: "We are very excited to confirm these dates with our friends SEPULTURA and CROWBAR. Don't miss this tour. It's going to be a blast! We can't wait to see you."

SACRED REICH's latest album, "Awakening", was released in August 2019 via Metal Blade Records. SACRED REICH's first LP in 23 years was produced by Arthur Rizk, who has previously worked with CAVALERA CONSPIRACY, POWER TRIP and CODE ORANGE, among others. The album marks SACRED REICH's first release since the return of drummer Dave McClain.

"Awakening" was described in a press release as "a timeless collection comprised of blistering thrash, crushing grooves, killer solos and socially conscious lyrics that demonstrate a true understanding of everything that matters most in the world today."

CROWBAR recently completed work on its new album for a tentative 2021 release via eOne. Guitarist/vocalist Kirk Windstein described the effort as "a killer record — I love it. It's got a lot of [guitar] harmonies and it's got a lot more doomy riffs. We only had one proper fast song — one of our more upbeat, hardcore-type, MOTÖRHEAD speed, I call it, type tunes; we've only got one like that. Out of all 10 tracks, besides that one tune, there's only maybe two other fast, what I would consider fast, songs on the whole record. So it's kind of a throwback but a modern, more mature touch on it." 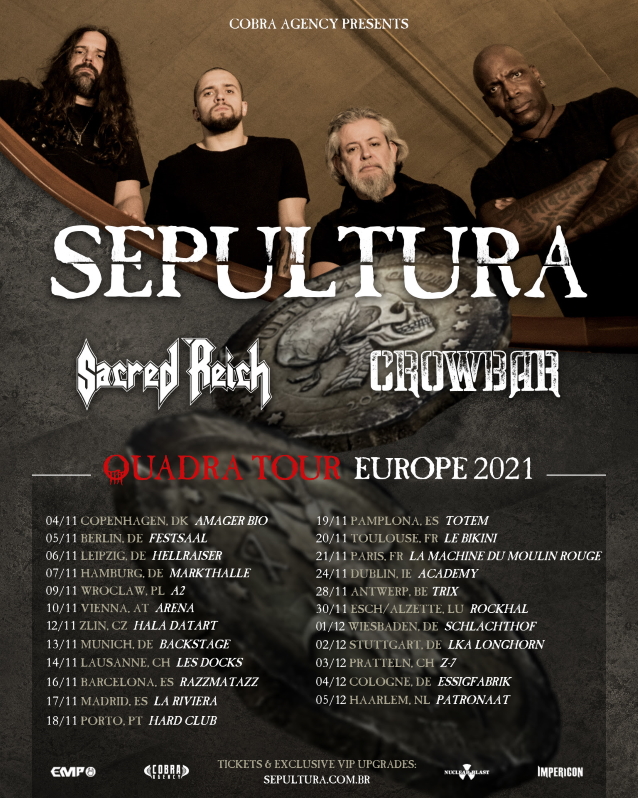