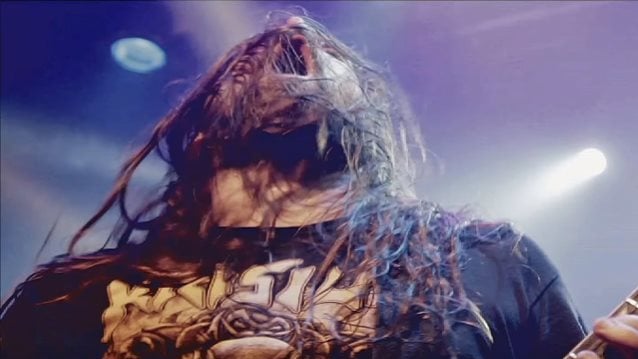 Casper of Silver Tiger Media recently conducted an interview with guitarist Andreas Kisser of Brazilian/American metallers SEPULTURA. You can now listen to the chat using the audio player below. A couple of excerpts follow (transcribed by BLABBERMOUTH.NET).

On the songwriting process for SEPULTURA's new album, "Machine Messiah":

Andreas: "I write music all the time. I have SEPULTURA, I have DE LA TIERRA, which is my other band, and different projects and soundtracks here in Brazil for movies and TV series. So I have a lot going on all the time. It's very natural and common for me [to be working on new music] — especially nowadays; we have the smartphones and everything that you can record any type of idea anywhere anytime. At the end of last year, we started to collect all these ideas, especially me and Eloy [Casagrande, drums]. Eloy also had some drum loops and drum parts here and there that we started to organize. And then, in February of this year, we went into the studio and really started to develop the songs and the ideas. So we had the title very early in the process, 'Machine Messiah', and all that we wanted to talk and the direction we wanted to go. And every time, we like to do a demo, and [make] a pre-production [recording] as more complete as we can. And then comes the producer, Jens Bogren, and then we take it to the next level, and then make the best that we can together for each song and everything. So the time period [that it took to write the album], it was, actually, like a short time, because at the end of April, we were already in the studio recording. But it was more like a quality time than quantity. Every time we were in the practice room, we really worked hard on all the possibilities. I came back home and in my portable studio, Pro Tools, I worked on different editions and different possibilities, put extra guitars… Anyway, there was a lot of work involved in that respect. So we used our time the best that we could, and it worked out great, it worked out perfectly."

On what it was like to work with producer Jens Bogren this time around:

Andreas: "Oh, fantastic, man. He's an amazing guy. Since day one, when we first started to talk about working together and everything, there was a chemistry going; we were talking the same language and we wanted to go [in] the same direction. He was happy to be with SEPULTURA. We talked to bands that worked with Jens before, like MOONSPELL and KREATOR, OPETH and ANGRA. All amazing references — very positive references. People love to work with him. And we went to Sweden. Since 'Chaos A.D.' in '93, we didn't record anything in Europe, so it was great to go back there and have a nice, new vibe. It was around May, it was nice in the beginning of the summer and everything, and we could really focus a hundred percent on the album and do the best that we could. And Jens was fantastic. He [has great attention] to details, he's very disciplined, very professional, [has a] great sense of humor, which is very necessary in a project like that. And it was awesome. He's an amazing producer, a great musician, with a lot of sensitivity towards how a song should be presented. And, like I said, we were working towards the same goal. And he brought, for instance, the suggestion to use the violins from Tunisia, which opened so many new possibilities and new ground to work on, especially on guitar leads and stuff like that. So it was fantastic, man. He was the perfect choice."

"Machine Messiah" will be released on January 13 via Nuclear Blast. Inspired by the robotization of our society, the disc was recorded at Fascination Street Studios in Örebro, Sweden. The CD's stunning cover artwork was created by Filipino artist Camille Della Rosa.