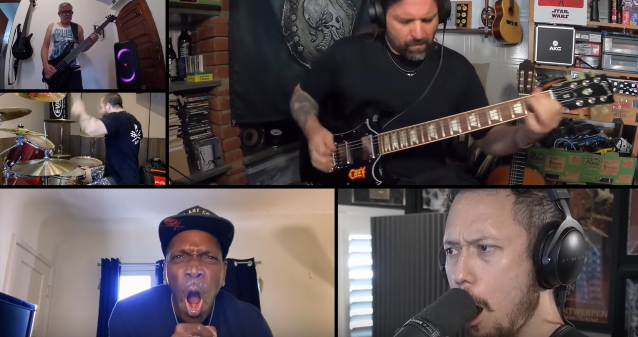 TRIVIUM's Matt Heafy recently teamed up with the four members of SEPULTURA to record a quarantine version of the SEPULTURA classic "Slave New World". Check out video below. The original version of the track appeared on SEPULTURA's 1993 album "Chaos A.D.".

Guitarist Andreas Kisser told Metal Hammer about SEPULTURA's approach on the LP, which was recorded at the legendary Rockfield Studios in South Wales with producer Andy Wallace: "You have to understand that we had spent two years touring with 'Arise'. It was the first time that we'd seen the world, and actually could analyze and understand what it was like being Brazilian outside of the country. We saw Brazil from a different angle — one that changed the way we felt. Even with 'Arise', we were still writing lyrics that were very heavy metal, very based in fantasy. But now we began to get more social and political. We wrote about things that were going on in our country — the poverty, the repression — because these things made an impact on us. Musically, we'd also developed. We had learnt what worked, and what didn't, from playing so much live, and getting to know people like Ozzy [Osbourne]. We had made the jump from boys to men.

"Andy helped enormously. We learnt so much form him during our time together, not just in terms of studio experience, but he also got us to think more about how we wrote songs."