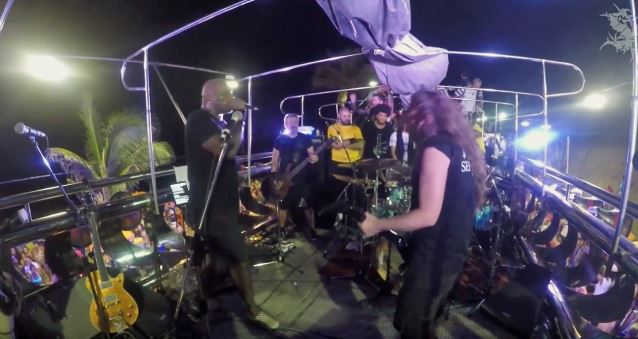 The stage was set on a fancy truck which drove 4.5 kilometers on the roads connecting Barra beach to Ondina beach in Salvador, Brazil's third-largest city and country's cultural heart.

ANGRA manager and Toplink music director Paulo Baron and Carlinhos Brown, one of the most important drummer/percussionists and songwriters in modern Brazilian music, came up with the idea for the concert when they met at Rock In Rio last year.

Locals and visitors spent the day in the summer heat by the paradise beach of Barra to reserve their place by the truck to get a close view of the stage. Some of the people that packed the streets of Salvador were not previously familiar with heavy metal.

Fans throughout Brazil enjoyed the seven hours of live classic rock and metal as it was broadcast on TV and Internet.

The audience went down in history as the biggest ever for a metal concert in Brazil headlined by national acts.

According to Baron, the idea behind the concert was to eliminate any type of prejudice against rock and metal by having Brazil's two biggest metal bands play at such a popular event and prove that rock and metal are universal styles of music that can excite an audience in any setting.

SEPULTURA's official video recap of the event can be seen below.