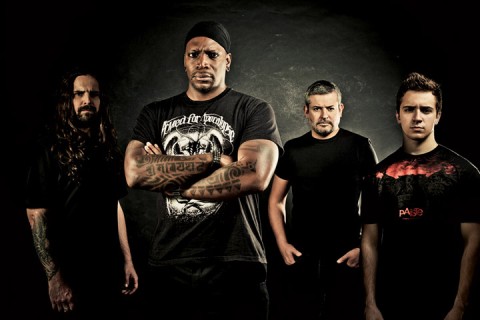 Brazilian/American thrashers SEPULTURA have been confirmed for next year's edition of the Rock In Rio festival, set to take place in September 2013. The band will be joined on stage by Les Tambours Du Bronx, featuring sixteen drummers from France.

SEPULTURA's concert at Rock In Rio will be professionally filmed for the band's next DVD, to be released sometime in 2014.

Professionally filmed video footage of SEPULTURA's performance with Les Tambours Du Bronx at this year's edition of the Wacken Open Air festival — shot on August 2 in Wacken, Germany — can be seen below.

Asked about SEPULTURA's plans for the remainder of 2012, the band's guitarist, Andreas Kisser, recently told Metal Hammer, "We're going to Indonesia and Malaysia, we're going to South America still, and we're doing a cruise at the end of the year — Barge To Hell — which will be very interesting. And then we're gonna stop. We're already thinking about new ideas for the next album, so probably next year we're gonna have something new going on. We have also plans to record a DVD with the French percussive group [Les Tambours Du Bronx], [with] which we did a show at [the] Wacken [Open Air] festival [in early August] — old SEPULTURA, new SEPULTURA music with them. And that's the plan — finish the year on a high note."

Regarding what SEPULTURA's new, 21-year-old drummer Eloy Casagrande has added to the band, singer Derrick Green told Metal Hammer, "Definitely the fact that he's young and that energy helps a lot. He's a very disciplined drummer — he's been playing since he was seven. And he's been doing a lot of things by himself and playing with different people, and that's really, really impressive. He had a lot of things put together before we even met him; he's already done so much. And I think with us, a combination us together, it's a great learning process for him to grow and at the same time, we're learning a lot from him, so we can do this together. And this is something extremely important when you're doing a band that's been together for so long, to have this connection. And we felt this connection with him immediately. And we could tell that he was very focused and very committed to doing extremely good music."

SEPULTURA is touring in support of its 12th studio album, and Nuclear Blast Records debut, "Kairos", which hit stores in July 2011.