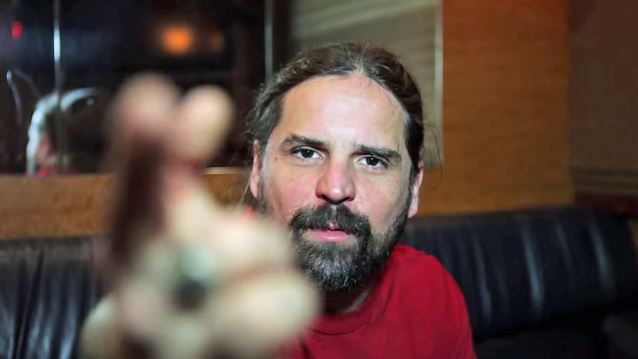 Yell! Magazine recently conducted an interview with guitarist Andreas Kisser of Brazilian/American metallers SEPULTURA. You can now watch the chat below.

Asked what his "greatest memory" is from the nearly thirty years that he has been a member of SEPULTURA, Kisser said: "Wow, my greatest memory… Well, fortunately, we have so many. [Laughs] It's great to look back at thirty years and see so many beautiful things that happened with the band and myself, personally. We had so many special shows, you know?! I think the tour with PANTERA was very special. The show with BLACK SABBATH in Costa Mesa in 1992 was amazing. [Playing] Indonesia in 1992 as well… I don't know… Recently, [playing] Rock In Rio [USA festival in] Las Vegas with Steve Vai, celebrating thirty years [of the band's history. I think it is a very special moment now, to celebrate such a special mark, and the momentum that SEPULTURA is living today. So, celebrate now… [Laughs]"

On the topic of whether SEPULTURA has already begun work on material for the follow-up to 2013's "The Mediator Between Head And Hands Must Be The Heart" album, Kisser said: "No, we've been very busy, actually, touring. We did a lot of touring. It's the second year now that we're touring for 'Mediator'. We've been to Europe twice and Russia. [We played] some shows in South America. Now we are here in North America. We go back to Europe for [Germany's] Wacken [Open Air] and [U.K.'s] Bloodstock and [Czech Republic's] Brutal Assault. We still wanna go to Scandinavia. So this year, 'till November, more or less, we're gonna still be very busy touring. But now is the time that we're gonna start really being more serious about the next album. Ideas are flowing all the time; I record stuff every time, and Eloy [Casagrande, drums] as well. We just need to stop and really put together the ideas and start a concept and everything. But, for 2016, we don't have a specific date or time yet [when we might release the new album]."