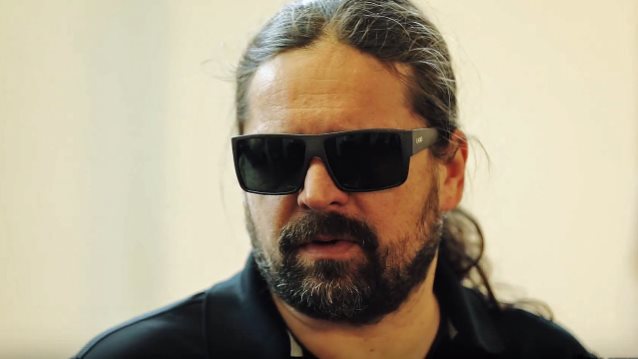 SEPULTURA guitarist Andreas Kisser was recently interviewed by Andrew McKaysmith of Australia's "Scars And Guitars" podcast. You can now listen to the chat at this location.

Asked if SEPULTURA would ever consider re-recording material from early albums like "Morbid Visions" and "Schizophrenia" with the band's current lineup, Andreas said: "No, man. I don't see myself or SEPULTURA doing that. With all due respect to the bands who [do] that — I'm not judging anyone. Everyone has their reasons to do… I know bands that did that because of contract and label problems, all that kind of stuff. But I don't see ourselves doing something like that. First of all, it's too easy to do that. [Laughs] The album is done, the songs are known and everything… I don't know… I don't think it's fair to history. It is what it is. The studio we used and the sound that was not good enough and all the equipment. It is what it is— that's the beauty of it all. We managed to create that sound with all the difficult things we had. And we had another mind and another… we were young and whatever. There are so many variables. I think it's a waste of time — for us, at least."

After the interviewer pointed how abysmal the infamous 2002 re-recordings of drum and bass parts on Ozzy Osbourne's classic "Blizzard Of Ozz" and "Diary Of A Madman" turned out to be, Andreas said: "That was horrible, man. There's no sense. I mean, I understand people fight with lawyers and contracts and what is written and what is not, but to get to that level, to that point… What's the point? Who's gonna listen to that? There's nothing there. There's no chemistry, there's no reason to do something like that. I mean, especially because [late Ozzy guitarist] Randy Rhoads is not even here. He wrote that stuff. It's insane; it's so disrespectful, not only for Randy's legacy but for Ozzy fans. It's something that I wouldn't like to see somebody doing something with SEPULTURA albums like that — just changing the drummer or the singer or something. It's crazy."

Andreas was also asked how he manages to keep his cool while constantly being asked about a possible reunion of SEPULTURA's classic lineup. He responded: "It is a part of our life, [whether] we like it or not. This is something that we have to deal [with], and we deal with that. We don't go to interviewers and say, 'Oh, you're forbidden to mention Cavaleras [brothers Max and Igor Cavalera, who left SEPULTURA in 1996 and 2006, respectively] or something like that.' This kind of shit creates tension, creates mystery — that stupid shit. We respond to everything. We have no secrets. We just talk about it. Of course, it's kind of boring sometimes, because people try to reunite the band with a question. And at the end, it's their problem — it's their problem if they like [it] or don't like [it]; it's not our problem at all. We're not here to please everyone. I respect the fact that you like SEPULTURA, whatever formation of phase of the band, and that's enough for me. I respect that; that's great. And you have all the rights to think about whatever you want and like whatever you like. But it's something that [happens] less and less as we go forward. Nowadays we're doing so many different stuff compared to what Max is doing, and very different bands, very different approach to music and lyrics, but people still insist to put us in the same pot, because Max always talks about SEPULTURA and he does a 'Roots' tour and all that stuff, and even a lot of people are confused about that. But we're here, we're here in 2018, living in the present and respecting the past and building a future — that's what we do, and that's how we enjoy what we are. And that part, our past, it is what it is, and we face the challenges."

Igor and Max Cavalera have spent much of the last two years celebrating the 20th anniversary of SEPULTURA's "Roots" album by performing the LP in its entirety all over the world.