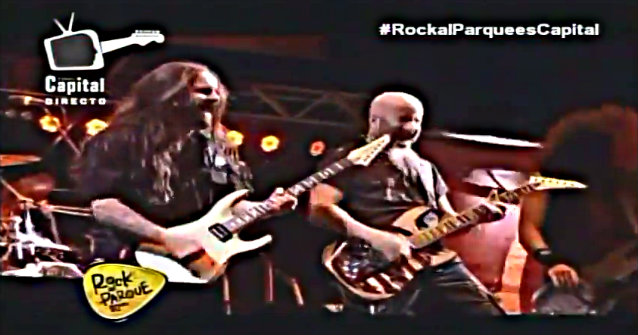 Kisser toured with ANTHRAX in 2011 as the fill-in for ANTHRAX guitarist Scott Ian while Ian spent time with his family following the birth of his first child.

Kisser made his live debut with ANTHRAX on July 2, 2011 at Veltins Arena in Gelsenkirchen, Germany as part of a "Big Four" show with METALLICA, SLAYER and MEGADETH.

In a letter addressed to Andreas on ANTHRAX's official Facebook page, the band wrote, "Words cannot express the feeling of love we have for you. From the first day, you were a part of the family. You were the only choice to fill in for Scott and that decision proved to be the right one. Thank you for being you."

Speaking to RockAAA at the U.K. installment of the Sonisphere festival in 2011, ANTHRAX bassist Frank Bello said, "Andreas locks in with the band like he was always here. So there's not a thought to playing; we don't have to worry. It's nice to go on stage and not have to worry. That's the last thing we wanted to do. And he's good, he's so locked in, even with the cues, the vocals everything. Boom! It's ANTHRAX."