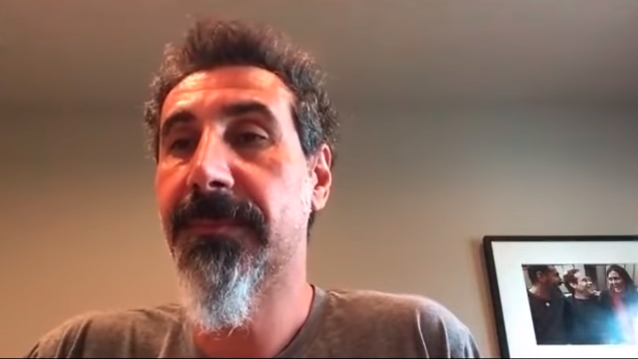 SYSTEM OF A DOWN frontman Serj Tankian has blasted President Donald Trump's handling of the coronavirus outbreak in the U.S.

Trump has been criticized by members of the media for using his daily White House press briefings to spread misinformation during a pandemic, with some channels going so far as to make an editorial decision to stop airing the briefings live.

The singer said (see video below): "[Trump is] obsessed about himself, and the economy is his barometer of his presidency, in his mind, so he doesn't want the economy to fail, and, obviously, it's going to fail. All the economy in the world is failing because of this involuntary cause," referring to the pandemic.

"Everything that he says in his press conferences reverts back to him and how well his government is doing, or making fun of the press for… not making fun, but basically beating down on them, that they wanna replace him and this is all about his re-election," Serj contined. "It's all about him. Same with [President Jair] Bolsonaro in Brazil. The guy is so dangerous."

According to Tankian, one "positive takeaway" from the current crisis is that "maybe even those hardcore — although I wouldn't hold my breath — but some of these hardcore supporters of these right-wing populist leaders might just look at them and go, 'How useless are these guys?' They're completely useless," he said. "You look at the prime minister of Armenia Nikol Pashinyan's speech, you look at other speeches by formidable leaders around the world, and then you look at these clowns. It's embarrassing."

The World Health Organization (WHO) officially declared the spread of the new coronavirus, which began in China in late December, a pandemic on March 11. More than 784,000 cases have been reported worldwide and more than 37,000 deaths so far, putting public health systems and emergency services under immense pressure.