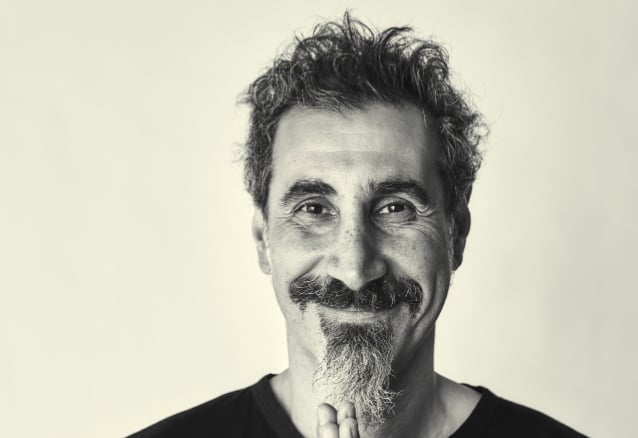 Serj Tankian has unveiled a lyric video for the song "Your Mom". The clip was directed by artist and animator David Bradford, who has worked with Tankian on solo projects as well as projects with SYSTEM OF A DOWN.

Bradford explains his concept for the "Your Mom" clip: "As I listened to the beginning of the song, with the more mellow acoustic guitar, I envisioned a brave bird flying over a countryside, unaware of the danger waiting in the ashen, war-torn lands ahead. This didn't stop the bird from gliding into danger and took the form of 'Your Mom'. As the fighters continue their campaign of destroying the Earth with their bombs and chaos, the mom summons the strength from her connection to Mother Earth and becomes the personification of justice against the fighters. She kicks their asses and returns to the form of a bird, perched on the carcasses of the destroyers and restores the Earth's balance."

"Your Mom" is the third song from Tankian's five-track EP "Elasticity" to receive a visual accompaniment, with the Los Angeles- and New Zealand-based musician previously releasing both the Vlad Kaptur-directed video for "Elasticity" and the politically charged "Electric Yerevan" video.

"Elasticity" is available now digitally and on CD, with the galaxy-colored vinyl version of the album arriving on April 30. A collection of autographed, and limited-edition "Elasticity"-themed merchandise can also be found on the Tankian webstore.

Regarding how the idea for "Elasticity" came about, Serj said: "When I conceived possibly doing another record with the guys from SYSTEM OF A DOWN a few years back, I started working on a set of songs that I arranged in rock format for that purpose. As we weren't able to see eye to eye on the vision going forward with an SOAD album, I decided to release these songs under my moniker." With his trademark eclecticism and one-of-a-kind vocal style, Serj delivers a collection that runs the gamut from hard-driving, electronically enhanced anthems like the title track, a rallying cry for his beloved Armenia ("Electric Yerevan"),the piano-laden "How Many Times?" and "Rumi", a song that Serj wrote both about his son Rumi and Rumi the poet.

Most recently, Tankian composed the full musical score for award-winning documentary "I Am Not Alone" directed by Garin Hovannisian and the upcoming Live Nation Productions film "Truth To Power", which chronicles Serj's own journey through the crossroads of music and activism. In 2017, Serj composed music for Emmy-nominated "Intent To Destroy", a gripping film directed by award winning documentarian Joe Berlinger. That same year he created an intense score for the epic Russian action film "Furious - The Legend of Kolovrat", followed by his 2018 musical score for award-winning film "Spitak", directed by Alexander Kott. Additionally, Tankian composed the full musical score for independent films "1915" and "The Last Inhabitant", an original composition for Ilya Naishuller's "Hardcore Henry" and video game musical scores for "Midnight Star" and its sequel, "Renegade", which were created by one of the chief architects of the famed "Halo" game franchise.