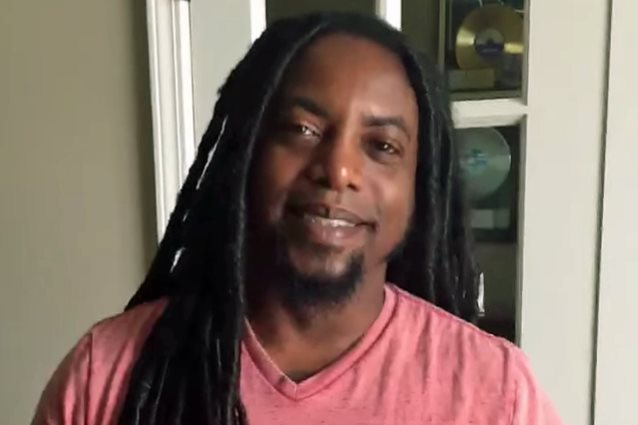 SEVENDUST frontman Lajon Witherspoon has released his debut solo single titled "Love Song". He stated about the track, which is available via all digital music retailers: "I think it resonates with what's going on in the world today."

Witherspoon has been talking about pursuing a solo project for at least the past four years. He told Alternative Addiction in a 2013 interview that his solo material would be a departure from the sound SEVENDUST fans have come to expect from him.

"When I sing and people hear my voice, I have to believe they'll compare it to SEVENDUST, which I don't mind, because that's where my roots are," he said. "But I think my stuff will definitely have rock and a lot more soul. SEVENDUST has a groove, but I think I'll be a little bit different."

SEVENDUST will enter the studio this fall to record the follow-up to 2015's "Kill The Flaw" album for an early 2018 release. The disc will be produced by Michael "Elvis" Baskette, who has previously worked with ALTER BRIDGE and SLASH, among others.

SEVENDUST last year received its first-ever Grammy nomination after two decades together as a band. "Thank You", the debut single from "Kill The Flaw", got the nod for "Best Metal Performance".

Hey y'all 🎼I'm releasing a single tomorrow 9.4.17 called "love song" I think it resonates with what's going on in the world today. If you have time tomorrow go check it out. Let me know what you think. Good bless y'all 🙏🏾😍😍😍👁👁#lajonwitherspoonsolo