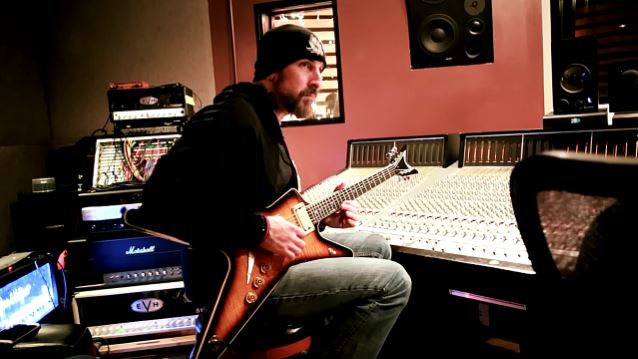 SEVENDUST guitarist John Connolly has commented on the events of November 13 in Paris, France, when more than 129 people were killed in seven coordinated terrorist attacks.

Speaking to Levi Seth of the Australian web site Sticks For Stones, Connolly was asked how SEVENDUST's touring plans have been affected by the recent concert tragedy. He said (hear audio below): "Well, everything that we've got going on in the immediate future is all stateside anyway. We've got a Dallas New Year's show and then we've got another show on the 28th. Other than that, the next thing we have on the schedule is [playing in Australia] in March. So we should be fine with everything that we've got right now. I mean, God forbid anything terrible happens between now and then, which I'm sure it will. But it's one of those tough things."

He continued: "I totally understand why [LAMB OF GOD] made the call that they did [to cancel the remainder of their European tour]. I don't blame them for making that call. A buddy of mine, Mark Tremonti, just went over there, and, of course, my wife asked me how I felt about it. And I said, 'Look, it's a decision that every person has to make on their own. A different set of circumstances and all that stuff.'"

John added: "On one side, I absolutely don't wanna live in fear and let the terrorists dictate how we go about doing our business and stuff like that. But if you've had a direct threat or anything like that, it's just, like, you know what? At this point in time, take it seriously. Life is not worth a show, having a good time and stuff like that. But at the same time, it's that fine line that you've got to tow because you can't let them make the calls on this for much longer than they already have. It's such a sad scenario. It's a crazy state of the world that we live in these days."