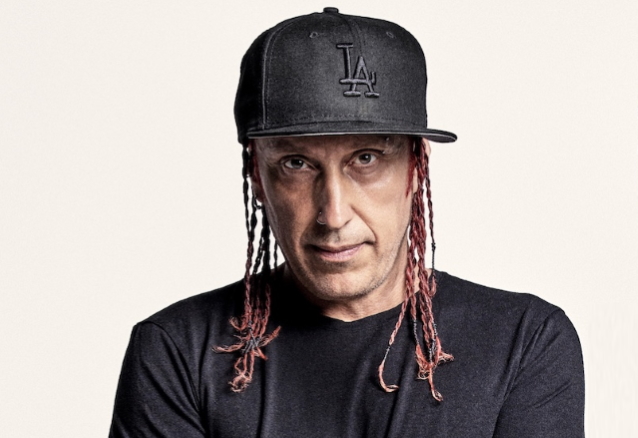 SEVENDUST drummer Morgan Rose will release his debut solo EP, "Controlled Chaos", in November. A teaser for the effort is available below.

Last December, Rose underwent surgery for an undisclosed ailment, causing the cancelation of the band's U.K. shows as the support act for ALTER BRIDGE and SHINEDOWN.

In a 2018 interview with CrypticRock.com, Rose admitted that he no longer parties as hard as he once did while on the road with SEVENDUST. "We are not the way that we used to be as far as the self-inflicted damage we put on ourselves with extracurricular stuff," he said. "Some of the guys are in tip-top shape. Me, I tend to have a few more beers or cocktails maybe than the other guy, but I get my rest."

In a 2018 interview with Drummer Visions Magazine, Morgan stated about what got him to play drums to begin with: "My dad basically started me. He played guitar and he wanted someone to jam with, so he bought me a kit when I was really young. Then I got into sports and kind of deserted playing drums, but it was always something I wanted to do. I had a buddy of mine that said, 'I have a band that plays parties and stuff,' so I got a kit and started playing covers at parties, no venues or anything. But I liked it so much that I wanted to learn something. I went to MI for six months and never went to school, I just partied, but I met up with some people who were in the scene and I basically played the whole role of being in a band without ever playing. I went back to Atlanta and started playing at parties again, and a band that was from Atlanta came to one of the parties and asked if I'd be interested in playing in their band. I got the gig but they broke up pretty quick. My name was getting around a little more. Then I started another band by myself, and we didn't have the best band but we were determined. The singer wasn't quite good enough. We got rid of almost everyone in the band and put together another band. That one lasted a few years. But there just wasn't a good vibe in that band. So then we started this band."