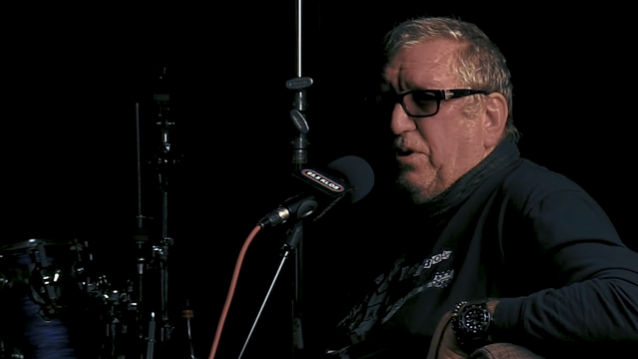 SEX PISTOLS Guitarist STEVE JONES Opens Up About Heart Surgery, Says Recovery Has Been 'A Bit Of A Nightmare'

Jones broke the news of his ailment during his show, "Jonesy's Jukebox", on the 95.5 KLOS station in Los Angeles.

"Three months ago, I was going to start the one-day a week," he said (see video below). "The day before I was gonna come in, I was in Malibu. I was with my friend Richard and my face started feeling wonky. I asked him, 'Does my face look funny to you?' He said, 'Yes.'… An hour later, I'm back at his house. I panic, I'm thinking I’m having a stroke. We called a paramedic and went to St John's and did all the checks. They kept me there overnight."

Jones's affliction turned out to be Bell's Palsy, which he admitted he "had no idea what it meant other than when I smiled I look like Popeye."

Three weeks later, Jones said that he started feeling better and was ready to resume his hosting duties when he woke up in the middle of the night with a pain in his chest. "I drove myself to [CVS] in Beverly Hills for aspirin," he said. He then headed over to Cedars-Sinai hospital where surgeons inserted two stents via his femoral artery to reopen blood flow to his heart.

He said the slow recovery has "been a bit of a nightmare, 'cause I think my heart was working at 30 percent. I don't know if it's come up a little bit since then."

Steve, who has battled a number of health issues in recent years, will continue to be monitored the coming months as he regains strength in his heart.

"I'm on eight [or] nine medications and I'm getting real weird reactions — dizzy and just out of my mind," he said. "I can't believe right now I'm not having a panic attack, 'cause normally when I'm around stuff that's happening, that's when I get I this weird feeling that comes over me."

"Jonesy's Jukebox" has been a staple of Los Angeles radio since 2004, when it started on the now-defunct Indie 103.1 FM. It is now said to be one of 95.5 KLOS's most popular programs.

KLOS previously described "Jonesy's Jukebox" as a "two-hour open forum show where the only rule is doing whatever Jones wants."

After his initial run with the SEX PISTOLS, Jones moved to Los Angeles in the early 1980s and became an in-demand session guitarist, working with the likes of Billy Idol, Joan Jett and even Bob Dylan.