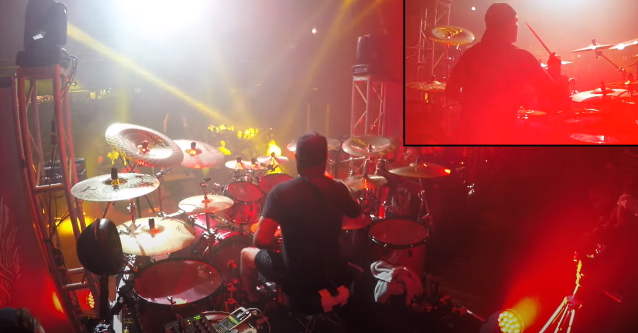 SHADOWS FALL's Jason Bittner has uploaded a drum-cam video of the "Fire From The Sky" performance at the band's one-off show, which took place on December 18 at The Palladium in Worcester in their native Massachusetts.

Bittner said in a message accompanying the YouTube release of the video: "This is one of my all-time favorites by us.......here's the first drum cam video from the SHADOWS FALL sold out Reunion show in Worcester, MA December 18, 2021 - Enjoy!!"

In a new interview with the Podioslave Podcast, conducted just days after the reunion gig, SHADOWS FALL singer Brian Fair stated about the comeback performance (as transcribed by BLABBERMOUTH.NET): "It was insane, man. It couldn't have gone any better than we could have hoped for. It was a long time coming. We sort of fizzled out as far as we never had a last big show to kind of head off into the sunset. We still all loved making music together, we all still loved playing shows, but life was just getting in the way. I was about to have my second kid; Paul [Romanko, bass] had already had a kid. It was just getting tough, so we sort of fizzled out. So, over the last few years, we would kind of, every now and then, just float the idea of, like, 'Yeah, we should probably play a show.' But then at five years, we were, like, 'All right. It's been long enough. We really wanna do this.' And we had a date, and we were all systems go, and then COVID happened. Literally, we were gonna announce probably three weeks before the world shut down. Thankfully, we didn't, so we could kind of just, like, 'All right…' It's not like we had to announce it and then retract. And it gave us some more time to really think about what we wanted to do.

"The key was for us we weren't trying to do like a quick throw-and-go, make-some-money-and-just-disappear thing," he explained. "We were, like, 'We want a sick bill that makes sense.' So once we got SWORN ENEMY, DARKEST HOUR and UNEARTH to sign on, we were, like, 'All right. That's where we wanna start. We want bands that make sense that are our crew.' And then we also wanted to get some local, kind of younger bands. Matt [Bachand, rhythm guitar] had been working with CARNIVORA forever. And we knew the WITHIN THE RUINS guys. And we were, like, 'All right, we've got our bill.' We knew it was gonna be at The Palladium before. That was like our backyard; that was like our hometown spot. We played so many metal fests and opened so many great shows [at that venue]."

Fair added: "And then we were, like, 'We also want to be razor-sharp prepared.' We were not known for rehearsing very diligently back in the day. We were kind of a lazy band when it came to practicing. We'd always get halfway through the set and be, like, 'We know 'Destroyer Of Senses'. We don't need to play it again.' And then you realize, 'We probably should have dusted it off.' So we really all focused and practiced like crazy, on our own and then together. And, man, that was probably as good as we've ever sounded. We were super ready. The crowd was incredible. We brought in an awesome crew and great production. We brought in the lights; we did the whole deal. We were, like, 'We're not nickel-and-diming this shit. It's gonna be a fucking party.' And it was, man. It was awesome. My family was out. I had the kids up on stage with me at one point. And Paul's kid came out. They got to see their dads being cool at least once, and not just on YouTube. The vibe was very celebratory. [There] was a crazy pit and people were going nuts, but it wasn't an angry vibe in there at all. It was very welcoming and very humbling as well."