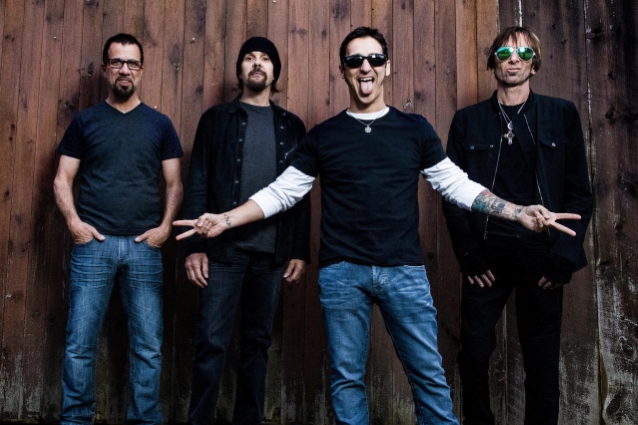 SHANNON LARKIN: 'You're Not Gonna See A Bad GODSMACK Record'

Metalshop TV conducted an interview with GODSMACK frontman Sully Erna and drummer Shannon Larkin prior to the band's March 27 show at Arena Wien in Vienna, Austria. You can watch the entire chat below. A few excerpts follow (transcribed by BLABBERMOUTH.NET).

On what makes their recent "When Legends Rise" studio album "the best" since their 1999 self-titled debut:

Sully: "Well, I think the quality and the maturity in the songwriting sticks out for me the most. You could close your eyes and point to a song on this record and make that the single and I think it would have done just as well as any other one. I've never been able to say that about every record we've done. There's definitely been some records where I feel like we had three or four songs where we felt any of these could be the one, but this is the first time I really feel like this entire body of work has been well-executed, like it feels true to who we are right now and what we feel and where we are in our lives right now."

Shannon: "A natural progression and to me, the new record felt like a natural progression after four years since the '1000hp' record, which I thought out of all them was my favorite at that point. I thought it was a perfect record. The same thing — you could point at a song, single, whatever. But the natural progression that all four of us, our wills came together, it seemed like, on this one. Everybody got on the same page and it comes from maturity, it comes from getting a little older and doing this for so long together. That was my favorite part of the new thing — just watching it all come together so naturally."

On whether the band expected first single "Bulletproof" to perform as well as it did:

Shannon: "Fortunately, ever since I've been in this band, all of our first singles are No. 1 in America. I'm not bragging — I'm saying it's true. When we heard 'Bulletproof', he came… For the first time, he used outside writers also. 'I wanna experiment here. Let me work with some other dudes.' And we were, like, 'All right. As long as it's great.' He came back and he was even a little nervous playing it for us because it had a different production, some synthesizers. He played it for us and we all looked at each other and went, 'Wow!' It's obviously GODSMACK. It's his voice and just the way he arranges songs. We could be working with other writers and it still sounds like GODSMACK, right? That was Tony [Rombola, guitar] and Robbie [Merrill, bass] and I's main concern. We're fans first and foremost, and we've seen bands in the past totally change their sound and when it alienates us as their fans, that's no good and it usually doesn't work anyway. When he came to us with 'Bulletproof', we were, like, 'Damn, it's great. It sounds great.' Obviously, too, it had a drum machine at the time. He's, like, 'This is just a demo and we will GODSMACK-ize it and we will make it us.' So we went with it. To me, it sounds like GODSMACK and it isGODSMACK and we love it."

On whether the band's new record label BMG was concerned about the 10-minute length of the music video for "Bulletproof":

Sully: "We have a great label, but they're more like partners with us. They don't really tell us what we have to do. They work as a partner. We tell them what we'd like to do. They loved it. We told them from the beginning. This is a new label [for us], too. We were at Universal for 17 years and this is the first record BMG has. We told them, 'Listen. We're doing things different this time. We're going to take control of all this again. We really feel that it's time to…' We also have to look at ourselves. I made a promise to myself a long time ago, and I'm sticking to that promise. I never wanted to be that guy that grows old in a band and is still trying to wear leather jackets and dye my hair black and [wear] belts. I'm not that dude. I'm growing up. I'm a father now; I'm an adult. I'm not going to force myself onstage and try to wear bandanas around my legs and whatever. So I think the videos, too, how many times can you do a video where you're just trying to look mean and tough? I'm kind of over it. I don't take life as seriously anymore and so right now, we're just all about having a good time. We're trying to appreciate these years. We're trying to appreciate our friendship. We're trying to appreciate the people around us that love and care for us. We want to have fun. We want to have a good time. We had plenty of years where there was a dark cloud hovering over us and now it's about having a good time. We did all that other stuff, by the way."

On how the music industry is different for GODSMACK in comparison to 20 years ago:

Shannon: "The biggest difference is that records don't sell. That's the big difference. There it is. It's streaming now and downloading and so we don't make money in that area, either. The only reason I mention this is because you need money. To push this forward in the GODSMACK way, we love to have a big show, man. We grew up watching bands who had a big show and you'd leave there and talk about it for weeks and that's what we wanted to be and that's what we do in America. It's not about us getting rich. We're not all fat rich guys. We invest in this band, to this day. This tour, we're still investing in this band. If records don't sell, then what do we got to do? We gotta go out and make our money by playing live which is what we love to do anyway. If it means investing in Europe and doing tours in which we don't make a penny, but we're breaking even, we'll keep coming back, we'll keep touring. We're not making money off record sales, and we wanna be able to bring someday our whole production to Europe. We'll show you how we blow shit up."

On writing music that connects with a live audience:

Shannon: "Always made music that connects well live. That's what we try and do. Firstly, we make music for ourselves. We try and make great music. When I was blessed enough to know this guy [Erna] and he called me and got me in this band and one of the first things: 'Look, we just need to make great music. That's all we have to do. That's our mission.' Everything else — we love to play and we've always played live and obviously we have the chemistry and we're all accomplished and talented at our instruments. Making great music is the 'end-all-be-all' in our world, in our life. No matter if we make one more record or we make 10 more records, you're not gonna see a bad GODSMACK record."

"When Legends Rise" was recorded at GODSMACK's headquarters (GSHQ) in Derry, New Hampshire and produced by Erik Ron and Erna.

GODSMACK's tour with VOLBEAT will kick off in Nashville, Tennessee on April 16 and will make stops in cities like Grand Rapids, Milwaukee, and Omaha. Eleven of the dates will take place in Canada, including in Edmonton, Winnipeg, Ottawa and Abbotsford. For most of the Canadian shows, VOLBEAT will co-headline.

The Massachusetts rockers wrapped up a co-headlining trek with SHINEDOWN over the summer and a European tour with LIKE A STORM earlier this year.