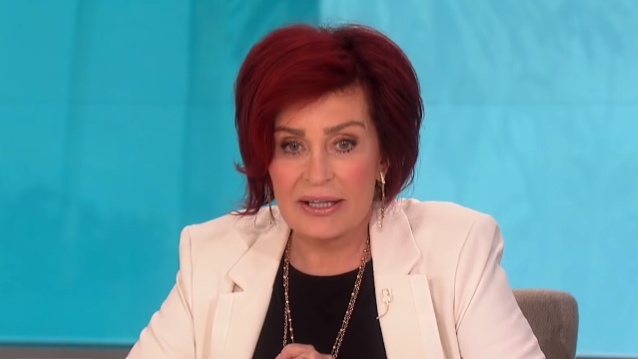 SHARON OSBOURNE: 'My Number One Priority Is Taking Care Of My Husband'

On Wednesday's (July 3) episode of the popular CBS daytime talk show "The Talk", Sara Gilbert asked the panel if they take enough personal time. Co-host Sharon Osbourne, who is the wife and manager of legendary heavy metal singer Ozzy Osbourne, responded: "I didn't until my husband's accident this year. I really didn't. It would be, 'I'll do it soon. In a couple of months, I'll do this or I'll do that.' And I would always put family stuff aside, and just realized after you have an accident how your life can change within a second. And [I] don't do that anymore. My number one priority is taking care of my husband."

In early April, Ozzy postponed all his 2019 tour dates, both in North America and Europe, as he recovered from an injury sustained while dealing with his recent bout of pneumonia. The singer fell at his Los Angeles home, aggravating years-old injuries from his 2003 ATV accident that required new surgery.

Most of the 2019 shows on what is being billed as Ozzy's last full world tour have been rescheduled beginning in February 2020. Fans are being asked to hold on to their original tickets, as they will be honored for the rescheduled dates.

The 70-year-old Rock And Roll Hall Of Fame inductee has battled a variety of health issues since kicking off his farewell "No More Tours 2" tour last summer. He contacted a staph infection in October that forced the initial postponement of his North American tour dates.

In January, Osbourne scrapped his European tour because of an upper respiratory infection that turned into pneumonia, forcing him to cancel dates in Japan, Australia and New Zealand.