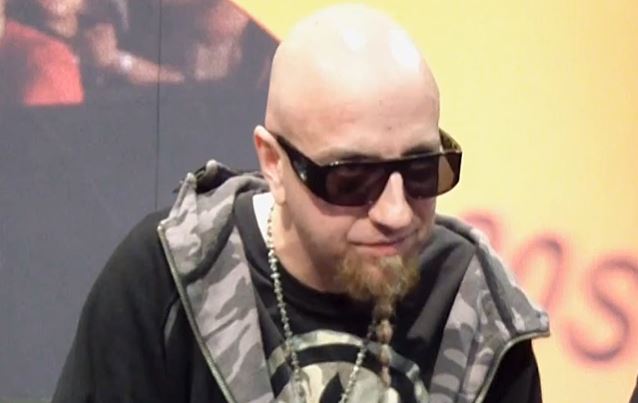 SYSTEM OF A DOWN bassist Shavo Odadjian says that the band has already worked on its first new music in a decade, with plans to enter the studio in the coming months to record a full-length album.

Asked by John Golden of Madcap Music Review at this past January's NAMM show in Anaheim, California if there is a chance that SYSTEM OF A DOWN will go into the studio soon to lay down some new tracks, Shavo responded (see video below): "Yeah, there's a very good chance. I don't have a date. We've already gone. We've written some songs. We're keeping it to ourselves. We're getting back to the bullshit of being together."

SYSTEM OF DOWN singer Serj Tankian said in a recent interview with RollingStone.com that "there has been talk" of the band recording a new album. Tankian explained, "We are going to play this (upcoming U.S.) tour, come back and we're going to see where we are… The openness is there to work together, but we haven't made any particular plans that we can announce."

Tankian added that a new record depends on whether he and guitarist Daron Malakian have "songs that work for SYSTEM," saying, "I have a few that could apply, but I'm not sure until the time comes where I can actually play them for the guys and see if it's something that vibes off them."

Although the band has been vague for years about its status and internal relationships, drummer John Dolmayan told The Pulse Of Radio a while back that the members of SYSTEM have always been friends. "I think a part of it is people like drama, you know," he said. "They look for it, and they want drama involved, they want SYSTEM to have problems. There's a lot of haters out there, let's face it, and as much as the fans really want the band to get together just so that they can see and enjoy the music again, there's also just as many people that would like to see us not getting along and, you know, no hope of reuniting."

Nevertheless, Dolmayan did hint last year at personal problems within the group. "You know, there's still some drama from the past that we've got to figure out, and the funny thing is that we get onstage, we have a great time," he said. "The last couple of tours have probably been the most fun we've ever had, but I'm a very honest guy. You know, there's problems in this band. But they're problems that can be figured out and we're in the process of doing that. We probably would have been in the studio making an album already, but for personal reasons, one of our members cant be in the studio right now. It's a positive thing, but that's all I can say on that right now."

SYSTEM OF A DOWN last released new music in 2005 with the "Mezmerize" and "Hypnotize" albums, but started to tour again in 2011.

The band will play in Los Angeles on April 6 before launching a string of European dates on April 10 in London.

The tour commemorates the 100th anniversary of the Armenian genocide and will conclude on April 23 with SYSTEM OF A DOWN’s first-ever performance in their homeland of Armenia, in the city of Yerevan.