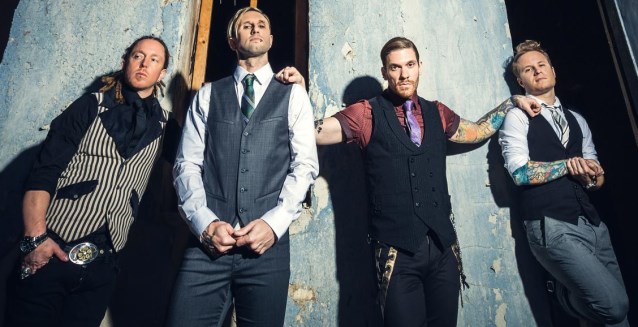 "Amaryllis", the latest album from the Atlantic recording group SHINEDOWN, has been certified gold by the RIAA (Recording Industry Association Of America) for shipments in excess of 500,000 copies. With this latest certification, all four studio albums released by the Florida band have been certified gold and/or platinum.

"Going gold on 'Amaryllis' is a true testament to our 'family' of fans," says SHINEDOWN frontman Brent Smith.

"In a time where music and the music industry is an ever-changing enigma, we as artists and performers must always remember that there is only one boss that we all truly answer to… and it’s everyone out in the audience. We are honored beyond belief to have such an amazing fanbase to get us to the next chapter."

In celebration of the gold certification and as a thank you to their fans, the band has a wide variety of special offers available now at the official SHINEDOWN webstore. For details, visit store.shinedown.com.

SHINEDOWN has already begun work on the highly anticipated follow-up to "Amaryllis". The band has also teamed with longtime collaborator Darren Doane — who directed the band's companion music videos for singles "Devour", "Sound Of Madness", "Bully", "Enemies" and "I'll Follow You" — on a full-length feature film to accompany the as-yet-untitled album's 2015 release.

SHINEDOWN singer Brent Smith and guitarist Zach Myers released four more acoustic cover songs on March 18, including their take on BON JOVI's classic ballad "Wanted Dead Or Alive". The four tracks were originally part of an album called "(Acoustic Sessions)", but did not get certain permissions in time from the original artists, forcing the six other tunes to be issued as an EP.

The four additional songs, which also include covers of ADELE's "Someone Like You", PEARL JAM's "Black" and PHIL COLLINS' "In The Air Tonight", came out under the title "(Acoustic Sessions, Pt. 2)".