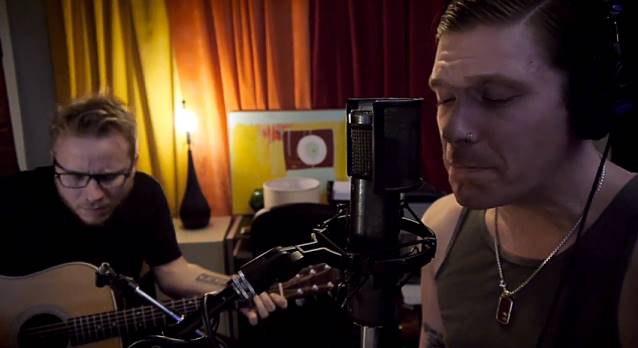 According to The Pulse Of Radio, SHINEDOWN singer Brent Smith and guitarist Zach Myers will release four more acoustic cover songs on March 18, including their take on BON JOVI's classic ballad "Wanted Dead Or Alive", for which the duo have just released a new video (see below). The four tracks were originally part of an album called "(Acoustic Sessions)", but did not get certain permissions in time from the original artists, forcing the six other tunes to be issued as an EP.

The four additional songs, which also include covers of ADELE's "Someone Like You", PEARL JAM's "Black" and PHIL COLLINS' "In The Air Tonight" will come out under the title "(Acoustic Sessions, Pt. 2)".

Each of the songs was recorded in a single take. Smith told Billboard that he and Myers "are so excited that finally all 10 cover songs are available for the world."

"(Acoustic Sessions)" made news last fall when it was reported that BON JOVI was not allowing SMITH & MYERS to release their version of "Wanted Dead Or Alive". The issue, Smith told Billboard.com, was that BON JOVI and three others — PHIL COLLINS ("In the Air Tonight"),ADELE ("Someone Like You") and PEARL JAM ("Black") — did not approve of SHINEDOWN's plan to post the videos online and effectively give the performances away. "Some of the artists were cool with letting us put (the videos up) and some weren't, and that's totally their decision," Smith explained to Billboard.com. "The six songs [we released first] are the ones that have videos with them, then [we went] back and re-record[ed] the other four songs."

He added: "We didn't write these songs. We did this for the audience and for the fans, and we know it's something they're gonna dig."

SHINEDOWN is also in the early stages of recording its fifth album, the follow-up to 2012's "Amaryllis". The sessions will be filmed for an accompanying documentary.