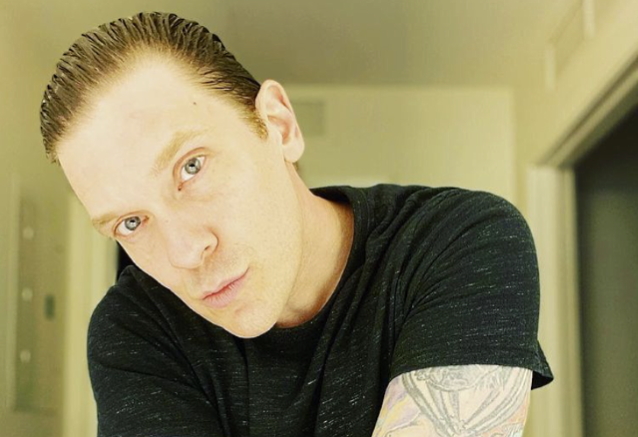 SHINEDOWN's BRENT SMITH On Touring During Pandemic: It's Bandmembers' 'Responsibility' To 'Stay Healthy'

In a brand new interview with HardDrive Radio, SHINEDOWN frontman Brent Smith spoke about what it has been like for him and bandmates to play live shows during the pandemic. He said (as transcribed by BLABBERMOUTH.NET): "Finally being able to get back out with SHINEDOWN, man, it was emotional. It really, really was. These eight shows, they were massive — they were, like, big attendance; everything was sold out.

"Obviously, people know what transpired," he continued. "We were in the middle of rehearsals, and then Barry [Kerch, drums] tested positive for COVID in the middle of rehearsals. We were able to get our good friend Dustin [Steinke] from SIXX:A.M. to come in and fill in for Barry for three shows until Barry had a negative test. Once again, Barry was fully vaccinated in April of this year, so it kind of is what it is. We got [Barry] back out there and then just stayed really meticulous with the protocol. We're still having to do behind the scenes… The outfit, we kind of create our own bubble. The crew stays with the crew. The band stays with the band and the crew. Days off, we don't kind of go out with anybody else; we kind of stick together. No one right now is able to go into any kind of big areas where there's a bunch of people without a mask, just because we're still in the middle of this. Because if one of the bandmembers tests positive, we're in a bad situation.

"So we're just trying to be meticulous about everything going into this next run, which is longer than what we just did," Brent added. "It's five weeks — a lot of big, big shows. The focus is just being smart, staying healthy, doing what we need to do. Because we don't need to go backwards. We've gotta push forward. You've got take responsibility for yourself also, man. You've gotta stay healthy. You've gotta stay up on things. You've gotta give yourself as much as you can. Especially in the industry right now — it's your responsibility. If you're a band or you're an artist that's touring right now, we're still in the middle of all this. So you've just gotta go through the protocol, man."

SHINEDOWN has spent the last few months recording its seventh studio album for an early 2022 release. The follow-up to "Attention Attention" is being recorded at a new studio in Charleston, South Carolina spearheaded by the group's bassist and producer Eric Bass.