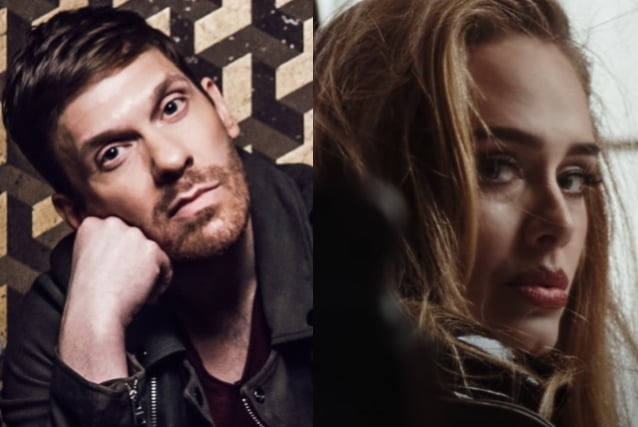 SHINEDOWN's Brent Smith has praised Adele for getting streaming giant Spotify to remove the shuffle button from album pages after the pop superstar commented that the order tracks were placed in was supposed to "tell a story."

As a result of Adele's request, the shuffle button — signified by two crisscrossing arrows — is no longer the default option for album listening on Spotify; instead, listeners will hear the tracks in their originally intended order.

"This was the only request I had in our ever changing industry!" Adele wrote on Twitter earlier today (Sunday, November 21). "We don't create albums with so much care and thought into our track listing for no reason. Our art tells a story and our stories should be listened to as we intended. Thank you Spotify for listening."

Smith was thrilled with the move, taking to Instagram to thank Adele and Spotify for giving "value back to the music and the artist."

"If anyone understands the importance of what an 'album' truly is, it is myself, @ebassprod @bkerchofficial @zmyersofficial and ALL of the @shinedown Family," Brent wrote. "The fact that @adele was able to get @Spotify to remove the shuffle button on album pages is massive. Simply put, albums do tell a story whether they are conceptual, or not. They are a snapshot, 'a window in time' into the hearts, and minds of the artist.

"Now some opinions of this will be what's the big deal, and why does it matter. It matters because it gives value back to the music, and the artist. Ultimately it comes down to respect. So with that being said, we applaud you @adele and @spotify… MUCH RESPECT".

A Spotify spokesperson told CNN about the decision to make the change: "As Adele mentioned, we are excited to share that we have begun rolling out a new Premium feature that has been long requested by both users and artists to make play the default button on all albums. For those users still wishing to shuffle an album, they can go to the Now Playing View and select the shuffle toggle. As always, we will continue to iterate our products and features to create the best experiences for both artists and their fans."

While many fans thanked Adele online for the update, a significant number of them were less enthusiastic about the move, with several fans criticizing the singer for making it more difficult for users to listen to the songs on her new album, "30", in a random order.

"30", which was reportedly streamed 60.7 million times on the first day it was available, details the breakdown of Adele's marriage to Simon Konecki, with whom she has a son, Angelo.