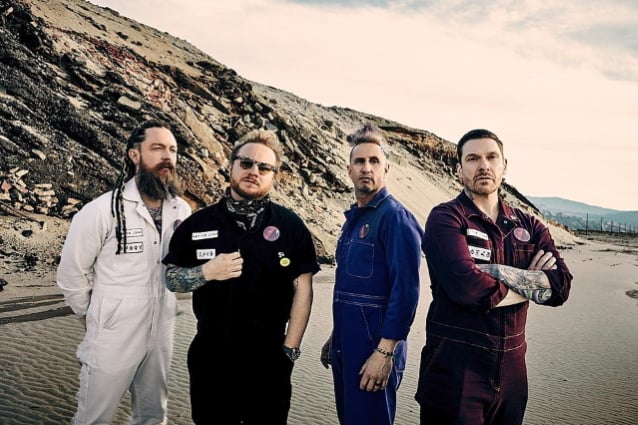 SHINEDOWN has decided to move the release date of its new album, "Planet Zero", to July 1 from the previously announced April 22.

The news of the LP's delay was shared in a video message on SHINEDOWN's social media earlier today (Tuesday, April 12). Guitarist Zach Myers said: "As a band, we have decided to sadly push our album from April 22nd to July 1st, and here's why. Due to delays in physical production of vinyl and CDs, we want everyone to be able to experience 'Planet Zero' together as a community, because that's what 'Planet Zero' is about. So pay attention to our e-mail newsletter and we promise you it will be worth the wait. Stay with us. 'Planet Zero'is coming; it's just coming a little later than expected."

"Planet Zero" sees SHINEDOWN taking on the forces that keep us divided at a time when we need to be coming together. These songs warn of the dangerous dehumanizing consequences of cancel culture run rampant — if we shut each other down, we risk losing empathy, respect for one another, and our ability to communicate and unify in a way that leads to actual progress and understanding. "Planet Zero" is an incisive look at some of society's most critical issues, including the increasingly toxic division among those of differing ideologies, the need for honesty in our public discourse, and the corrosive effects of social media and cancel culture on mental health and humanity. Part social commentary and part in-depth exploration of the human psyche, there is also hope, triumph, and reminders that we all need one another. After all, it is the band's impassioned striving for unity that has long been at the heart of their creative output.

The high-concept, ultra-vivid, viscerally charged album was produced by SHINEDOWN's Eric Bass (who also helmed the band's 2018 acclaimed album "Attention Attention") and recorded at Bass's newly built Big Animal Studio in South Carolina. "Planet Zero" matches its immersive world-building and takedown of authoritarianism with a deliberately unvarnished sound. The album is spliced with interludes featuring Cyren, an insidious and unsettling robot character that appears throughout the "Planet Zero" journey. While a raw ferocity fuels much of "Planet Zero" on tracks like "The Saints Of Violence" and "Innuendo", "No Sleep Tonight", and "America Burning", there is also hope, triumph, and reminders that we all need one another on songs like "Daylight", "Dysfunctional You", and "A Symptom Of Being Human". After all, it is the band's impassioned drive for unity that has long been at the heart of their creative output and deeply informed the making of "Planet Zero".

SHINEDOWN kicked off "The Revolution's Live" tour on April 1. Following this April and May run with special guests THE PRETTY RECKLESS and DIAMANTE, SHINEDOWN will head to Daytona Beach for Welcome To Rockville 2022 where they'll headline Saturday, May 21 alongside GUNS N' ROSES and RISE AGAINST. In June, SHINEDOWN will head overseas for a European run featuring festival appearances at Rock Im Park and Rock Am Ring in Germany, Download festival in the U.K. and Hellfest in France along with select shows with IRON MAIDEN. The band will then embark on a run of Canadian dates beginning in July with support from POP EVIL and AYRON JONES.

SHINEDOWN recently announced a new summer/fall 2022 U.S. tour in support of "Planet Zero". The trek, with support from JELLY ROLL and John Harvie, will kick off on September 3 in Kansas City, Missouri and end on October 8 in Anaheim, California. SHINEDOWN will also perform at the Aftershock festival in Sacramento, California on October 9.

We've made the difficult decision to move the album release from April 22nd to July 1st due to delays in vinyl production. We want to ensure our fans have FULL access to Planet Zero via every possible medium on the day it comes out! 💜 Much love! - Brent, Zach, Barry, Eric pic.twitter.com/D90uycPAFH