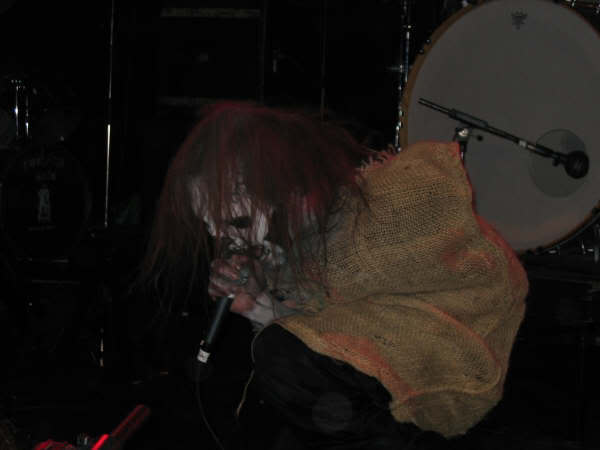 A BLABBERMOUTH.NET visitor by the name of Peter has submitted the following report from Swedish black metal band SHINING's controversial concert at Diezel in Halmstad, Sweden on February 3:

"I attended the gig and thought I'd give a report since there were so many conflicting stories...I felt that I needed to shed light on a couple of issues.

"So there I was waiting to see SHINING live and buy the new album. I had already seen SHINING one time and that concert was one of my most [memorable] concerts. But things didn't turn out as I thought. First of all, the new CD wasn't available (even though it was the release party) but I later learned that not even the band nor the record company had any copies of the album. Second, VESEN — who was [supposed to be] supporting — didn't show up so they were forced to skip them and go ahead with DHG and SHINING. [Editor's note: VESEN apparently went on after SHINING and closed the gig.]

"As for the third, the professional DVD shoot [that was supposed to take place consisted of] one guy with a camera changing cassettes every 10 minutes.

"The theme from 'Twin Peaks' is played and afterwards some guy with a blonde wig, sack with one hole for his arm and skeleton makeup starts to sing with the band (later I learned that this was none other than Attila from MAYHEM) [photo], and a cloaked man comes onstage and kicks Attila down. The cloaked figure is later revealed to be Kvarforth [SHINING singer Niklas Kvarforth], now covered in professional makeup looking like some shambling zombie; he looks horrifying and agitated at least [photo]. And then he grabs a guy's hair and yanks it upwards...and I was starting to get really worried about the direction this gig was taking.

"A couple of songs are finished and Kvarforth is standing with zipped up leather pants and some drunk Swede touches his crotch. Kvarforth looks shocked and shouts 'Don't touch me,' before he kicks the fan in the chest.

"Now he shouts for Maniac [ex-MAYHEM singer] and Maniac comes walking covered in fake blood and makeup AND A SWASTIKA CARVED ON HIS FOREHEAD [photo#1, photo#2]! And I can only think...errh don't you have kids?

"The 'Norwegian fan' that was said to assault Kvarforth was in fact Maniac who started to open a BIG can o' whoopass! Kicking [Kvarforth] down, throwing things at him with full force, I saw Kvarforth being kicked in the spinal column and got thrown guitar stands at him while lying on the floor. It got really terrifying when Maniac picked up a cup and smashed it to the floor which resulted in shards of glass to shatter, flying on the audience.

"And now comes the infamous handing out the razors… Well, there was this crazy Asian guy who knew all the SHINING songs and got eye contact with the singer. Without being hit or spat on, as the young gentleman on the Asian's right side had the pleasure of experiencing, Kvarforth placed a razor in his hand and smiled, dragging his finger across the throat and laughing. The kid put the razor inside his jacket, although he took it in his hand and it looked like he started to cut himself in the palm of his hand...it was very dark so I couldn't see what exactly he was doing but my only thought was 'DUDE! Are you a moron or something, you don't cut yourself with a razor some stranger gives you.'

"And then the last singer to enter the stage — none other than infamous Nattefrost of CARPATHIAN FOREST [photo] (yes, he flashed his dick, by the way),but his stage antics consisted of giving Kvarforth alcohol and singing. Kvarforth later spat out the liquid on the crowd and I knew that it wasn't urine because urine smells. 'Nuff said...

"The [newspaper reports] about the bassist [having quit immediately after the gig] might be because it was [allegedly] planned [for him] to break his arm and let the VESEN bassist finish the rest of the concert as a stand-in bass player (the plans were never put into action) but he was subject of beating and degrading abuse. Maniac also thrashed his bass amp, thus eliminating the bass on the two last songs.

"Post-concert: Hellhammer [MAYHEM/DIMMU BORGIR drummer] was seen at the venue and in Halmstad after the gig. I later learned that Hellhammer was supposed to play a track from 'The Eerie Cold' but due to his drum kit never reaching the venue Ludwig Witt had to step in.

"I must admit that I've never been so afraid [at a concert] in my whole life and everything just went spiralling out of control and I was almost counting down songs and hoping that the show would end without anyone being harmed. But I can't complain — I loved every second of it."

(All photos courtesy of Peter)